Fiorina Is Running: Is Her HP Record An Asset Or Liability? 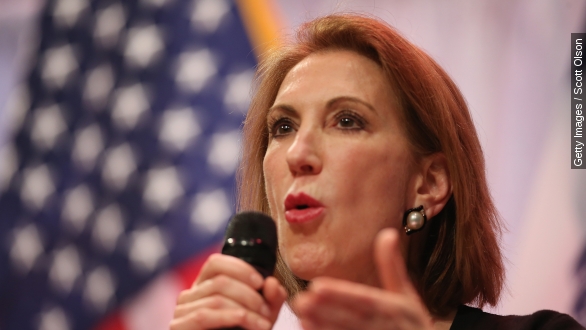 "Yes, I am running for president. I think I'm the best person for the job because I understand how the economy actually works. I understand the world, who's in it, how the world works," she told "Good Morning America" Monday.

Fiorina, who’s never held elected office, is best known for being the first woman to head a Fortune 20 company.

And although she touts that business experience as an asset, it could just as easily be used against her.

“As the CEO of HP, Carly Fiorina laid off 30,000 workers. Fiorina shipped jobs to China. And while Californians lost their jobs, Fiorina tripled her salary.”

Fiorina’s record at HP came under intense scrutiny during her unsuccessful 2010 Senate campaign — a record that includes mass layoffs, a controversial merger with Compaq and a stock that lost half its value. (Video via Carly Fiorina)

In 2005, Fiorina was forced to resign. Her departure sent the company’s stock price soaring.

Still, she points out that HP's profits grew under her watch.

And as an outsider with little name recognition, Fiorina faces long odds to win the Republican nomination.

Just 2 percent of Republicans surveyed in a recent CNN poll named her as their first choice for president.

But she stands out as the only woman running in a fast-growing GOP field, putting her in a unique position to go after the Democratic frontrunner.

“She tweets about women’s rights in this country and takes money from governments that deny women the most basic human rights,” told the Conservative Political Action Conference in January.

Fiorina — whose new book comes out this week — will make an appearance at TechCrunch's Disrupt NY conference on Tuesday before making the rounds in key early primary states.