Fingers Crossed For Comet Lander Philae To Wake Up Again 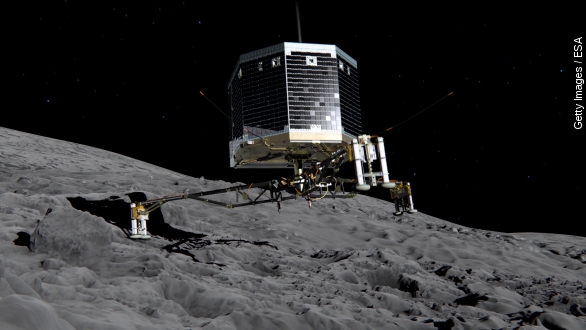 SMS
Fingers Crossed For Comet Lander Philae To Wake Up Again
By Steven Sparkman
By Steven Sparkman
May 7, 2015
The historic comet landing last November may have an extra chapter. Scientists are hoping the Philae lander will get enough sunlight to wake up again.
SHOW TRANSCRIPT

Philae, the plucky little lander that bounced its way across a comet last November, ran out of power a couple of days after impact and had to shut down.

But Philae's new home, comet 67P, is becoming a bit brighter and more cozy with each passing day. The comet is getting nearer and nearer to the sun, and is expected to reach its closest point in mid-August. (Video via European Space Agency)

That means there's a slim chance we haven't heard the last of Philae. Scientists at the European Space Agency are crossing their fingers that they will get a few more messages back from the lander sometime over the next few months.

But because Philae didn't exactly stick the landing, it's anyone's guess whether that will happen. The probe bounced several times, and ESA scientists still aren't sure exactly where it wound up.

For scientists to get any more messages, a string of unlikely things has to happen. Philae has to get warm, it has to get enough sunlight to charge up, and it has to transmit its signal while the Rosetta orbiter is close enough to receive it.

The orbiter is currently making a series of wide fly-bys, meaning it only gets close to the comet every once in a while. (Video via European Space Agency)

Combine that with the fact that Philae appears to have landed someplace dark and we're clearly looking at an uphill battle.

The first window to get a message from Philae takes place through mid-May, though we'll get several more chances before the summer is over.