How To Find The Funny During Hard Times 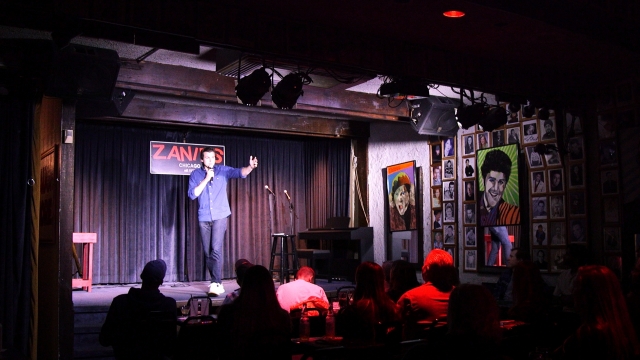 SMS
How To Find The Funny During Hard Times
By Casey Mendoza
By Casey Mendoza
October 6, 2021
Psychologists have found that finding humor in stressful situations can reduce hopelessness, anger and fear, and even lower blood pressure.
SHOW TRANSCRIPT

There's this saying that goes: Tragedy plus time equals comedy.

Pandemic jokes from Zanies and The Laugh Factory are here — but when you don't know when the tragedies are going to end, how much time is enough?

"I'm not one to remind us," Second City comedian Evan Mills said.

"Have you processed it? I'm still processing, you know? Like it's still happening," comedian Eunji Kim said.

"I don't know what my distance from this is like," Second City comedian Meghan Babbe said. "It still feels very much like we're in it."

"So the fact that we're in it — there's certain things that I think that, just, you don't want to touch," Second City comedian E.J. Cameron said.

At the beginning of the pandemic, finding humor sometimes meant shining the spotlight on something else.

Wholesome, heartwarming and escapist comedies like the Emmy award-winning "Ted Lasso" and "Schitt's Creek" were at their peak.

And the memes, TikToks and jokes on TV that were about the pandemic were softer allusions to being bored at home, learning to use Zoom and not being able to find toilet paper in stores.

"If you look hard enough, there's a glint of funny maybe," Cameron said.

That glint of funny was basically a coping mechanism — something that allowed people to actually laugh amid a major global tragedy.

"Maybe comedy-wise, we can kind of laugh together through the pain almost," one audience member said.

"We're living in it, so we might as well laugh about it," an audience member said.

"We need to be able to laugh about things like that," another audience member said. "So that's my personal opinion."

In the comedy world, laughing through tragedy can be tricky, but it's also sometimes a necessary part of the job.

Sketches about quarantine and the COVID-19 vaccine rollout on "Saturday Night Live." Movies like "Dr. Strangelove" satirizing the threat of a nuclear apocalypse. Filmmakers like Kevin Smith telling stories of his heart attack for fans.

"The material about almost dying and going through the heart attack and everything I interacted with — all played, as they say, road tested, got hardcore laughs," Smith said.

Humor can just offer a sense of relief, and laughter can quite literally be the best medicine.

"It was kind of therapeutic because this thing, which loomed large in my life, had been reduced to a plot device," Smith said.

Psychologists have found that finding humor in stressful situations can reduce hopelessness, anger and fear, and even lower blood pressure. Part of the reason is because laughing literally helps us breathe better.

"Being able to convene and laugh together is such a basic human compulsion," Kim said. "So there's a lot of gratitude in relief."

And experts say shared laughter strengthens our sense of connection — letting people laugh over their similarities, even if what they share are some pretty tough times.