Finally, Johnny Manziel And The Cleveland Browns Settle Their Divorce 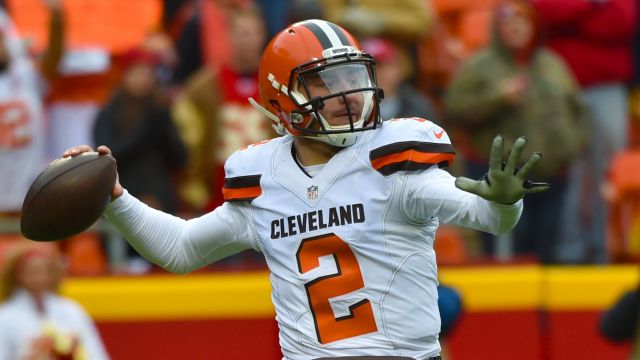 SMS
Finally, Johnny Manziel And The Cleveland Browns Settle Their Divorce
By Matt Moreno
By Matt Moreno
March 11, 2016
The Browns' statement in February said Manziel's "status with [the] team will be addressed when permitted by league rules." That day is here.
SHOW TRANSCRIPT

The Johnny Manziel experiment in Cleveland is officially over.

The Cleveland Browns cut the embattled 23-year-old quarterback Friday just before the start of the NFL's new calendar year.

The writing's been on the wall for Manziel's exit from the Browns for a while now.

In early February, the Browns released a statement saying "his status with our team will be addressed when permitted by league rules."

Despite his impending release from Cleveland and potential indictment by a grand jury over accusations he hit his ex-girlfriend in February, Manziel's kept a fairly public profile, attending the big UFC 196 fights and partying it up with Scott Disick.

Manziel signed a four-year, $8 million contract with the Browns in 2014. The Browns still owe Manziel more than $4 million.

This video includes a clip from WEWS and images from Getty Images.