Finalized Rule Would Block Immigrants 'Likely' To Use Public Benefits 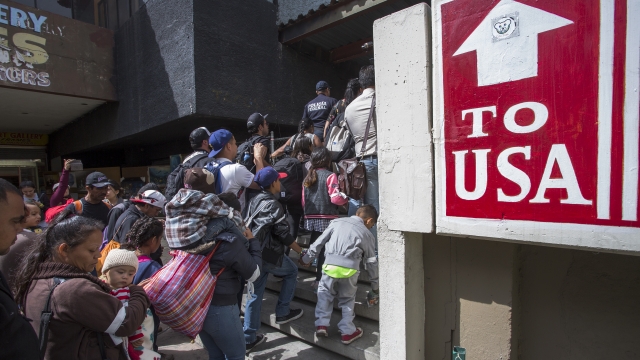 SMS
Finalized Rule Would Block Immigrants 'Likely' To Use Public Benefits
By Katherine Biek
By Katherine Biek
August 12, 2019
Under the rule, a person could be denied a green card or a visa if they use benefits like food stamps or public housing for a certain length of time.
SHOW TRANSCRIPT

The Trump administration issued a final rule Monday that would make it easier for the government to deny immigrants entry into the U.S. or change of immigration status if they're deemed "likely" to use a wide range of public benefits.

The rule would expand the definition of a "public charge," or a person who relies on government aid, such as cash assistance, food stamps, public housing or most forms of Medicaid. Under the rule, a person could be denied green cards and visas if they use one or more designated public benefits for more than 12 months in any three-year period.

The government currently operates under guidance issued during the Clinton administration, which says officials can only consider cash benefits when deciding if an immigrant is a "public charge." This new rule will expand the type of benefits that can be considered.

"Through the public charge rule, President Trump's administration is reinforcing the ideals of self-sufficiency and personal responsibility; ensuring that immigrants are able to support themselves and become successful here in America," Ken Cuccinelli, the acting director of U.S. Citizenship and Immigration Services, said in a press briefing

The Trump administration first proposed the rule back in September. It's since made some changes to the final regulation, such as making exemptions for children and pregnant women enrolled in Medicaid.

The rule also won't apply to refugees or asylum seekers. It's scheduled to go into effect in October.