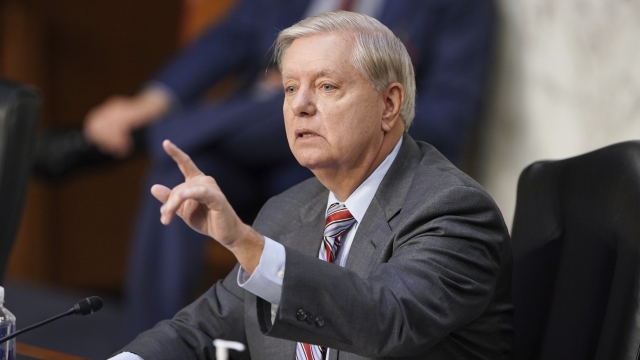 The Senate Judiciary Committee will move forward with the process to confirm Judge Amy Coney Barrett to the Supreme Court.

The committee will vote on Oct. 22 to advance Barrett's confirmation to the Senate, and she could even be seated on the bench by Election Day.

"There is no way you'll ever convince me that Amy Coney Barrett is not qualified using any reasonable standards of qualification," Graham said.

Democrats fired a warning shot at Republicans for going through with this confirmation.

"Don't think that when you have established the rule of 'because we can,' that the shoe be on the other foot, you will have any credibility to come to us and say, 'I know you can do that, but you shouldn't because of X, Y or Z'," Sen. Sheldon Whitehouse said. "Your credibility to make that argument at any other time in the future will die in this room and on the Senate floor if you continue to proceed in this way."

But Republicans — who stalled the nomination of Judge Merrick Garland to the high court in 2016, arguing it was an election year — say they're well within their rights to push this pick through.

"The precedent is clear for a long, long time that if the president and Senate are of the same party, the Senate in all, but extraordinary circumstances, confirms that nominee," Sen. Ted Cruz said.

Barrett was not present on the final day of questioning, where members voiced their closing arguments on her nomination and heard from character witnesses and opponents alike.

"I urge you to confirm judge Amy Coney Barrett to the Supreme Court of the United States," Laura Wolk said.

"I have put my faith in the Supreme Court, and with this nomination, I am losing faith," Crystal Good said.

Republicans have the votes, both in the committee and in the Senate, to advance the nomination despite three members testing positive for COVID at the beginning of the process, and GOP Sens. Susan Collins and Lisa Murkowski refusing to vote on a nominee before Election Day.