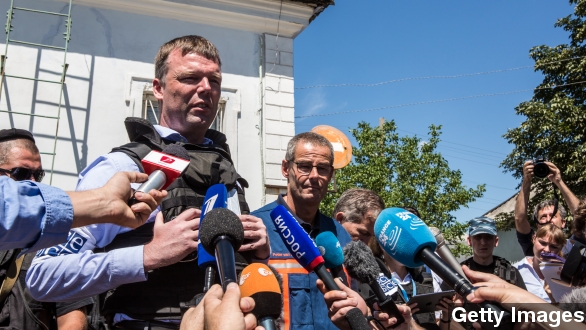 By Sebastian Martinez
July 27, 2014
A team of Dutch and Australian investigators postponed their trip to the MH17 crash site amid fighting between Ukrainian and rebel forces in the area.
SHOW TRANSCRIPT

A team of Dutch and Australian investigators in Ukraine reportedly had to cancel a trip to the MH17 crash site because of security concerns Sunday. (Via Getty Images)

The leader of the investigation, Alexander Hug, made the announcement that the visit would be postponed, saying, "The situation on the ground appears to be unsafe ... We therefore decided to deploy tomorrow morning." (Via Getty Images)

"They've decided not to go towards the crash site for now. That really tells you the sort of complicated and insecure environment they're operating in." (Via BBC)

Worries over the safety of the crash site prompted both the Dutch and the Australian governments to send police to help secure the crash site. (Via CNN)

"Today the Australian prime minister announced that a further 100 Australian Federal Police Officers will be deployed to the Netherlands as part of an international police force." (Via ABC Australia)

As many outlets reported, the police force is unarmed because that way it doesn't need to be ratified by the Ukrainian parliament to operate in the country. But most outlets were unclear about how exactly the team would provide any security, being unarmed. (Via The Telegraph, RTE, The Sydney Morning Herald)

The cancellation comes despite Malaysian Prime Minister Najib Razak's announcement on Facebook Sunday that the Malaysian government had come to an agreement with separatist rebels to allow the police force access to the site.

The region has seen heavy fighting over control of the rebel stronghold of Donetsk, with the U.S. State Department now alleging that Russia has supported rebels in the area with artillery fire, and Ukranian tanks closing in on the city. (Via Fox News)

According to The New York Times, Ukrainian officials are accusing Russia of even more direct involvement. "There were active-duty Russian soldiers who had surrendered, as well as volunteer Russian fighters who had been captured."

The Russian government has so far denied those allegations, and some Russian officials have even blamed the Ukrainian military of shooting down the jet, although those accusations haven't been repeated by President Vladimir Putin.

A full 10 days after the crash, pictures from the site show much of the wreckage still lying in the fields, and there are reportedly still remains of victims on the ground as well. (Via Getty Images)