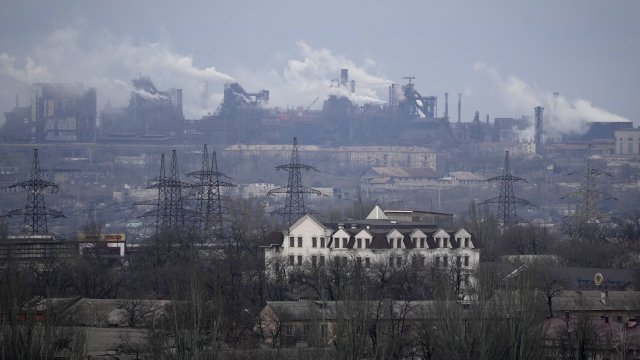 SMS
The 'Mozart Group' Hopes To Save Ukrainians Trapped In A Steel Plant
By Sasha Ingber
By Sasha Ingber
April 28, 2022
The group of veterans formed during the war in Ukraine, providing mine clearing, information operations, and evacuations, says its CEO.

Just staying alive has become a battle for Ukrainian civilians and fighters holed up in a steel plant in the besieged port city of Mariupol. A commander in the massive Azovstal compound says they're running out of food, water, and medicine as Russia's attacks continue.

Now, Newsy has learned of a nascent effort to rescue civilians there, which include women and children.

NEWSY'S SASHA INGBER: I've been told that the Mozart Group was planning to evacuate people in the steel mill in Mariupol. Can you tell me about that?

Former U.S. Marine Andy Milburn recently started the Mozart Group with other retired special operations officers. The name is a play on a Russian private military company called the Wagner Group, which has been linked to Moscow's military intelligence service and numerous atrocities abroad.

He says the Mozart Group has no ties to the government, and that there are about 50 to 60 volunteers in the country at a time, funded solely by individual donations. They're working with the Ukrainian military; providing training, mine clearance, medical support and evacuations.

INGBER: With Mariupol surrounded by Russian forces and the Russian forces inside the city, that steel plant completely surrounded — how would the Mozart Group be able to enter and then safely evacuate those civilians and those fighters who have decided not to stand down?

MILBURN: Yes, Sasha, you know I can't say that. I'm sure you have Russian fans too. So I'm certainly not going to answer it. Let me just say that there is, there's no guarantees that our plan will succeed. And no one here is overall, you know, no one here is saying, 'Oh, yeah, this is going to be a cinch.' What we are saying is that there are ways to do such a thing. And I'm afraid the only way we can find out if they're viable is by trying them. But it's better than not trying at all.

Russian president Vladimir Putin agreed "in principle" to the U.N. and Red Cross evacuating civilians at the plant  after he met U.N. Secretary-General António Guterres in Moscow. But obstacles could continue. Earlier this month, a Red Cross convoy said it had to turn around because of danger on the ground.

Meanwhile, the identities of Mozart Group members are concealed, out of concern for Russia’s aggression.

"They have gone after our website numerous times. They have shut down our funding streams. You can see there have been and they've done that either through actions in the cyber spectrum or through complaints about the fact that we are collecting donations through GoFundMe or Fundy," Milburn said. "We're very wary. We don't take the same route twice. We don't walk back alone at night, and some of us soon will be armed for self-protection."

He says they're also conducting information operations on Russian soldiers and their families, to try to influence their morale, but declined to explain how. Still, he says, these volunteers aren't fighting, unlike the mercenaries from Russia's Wagner Group who have massed in Ukraine.

"We are not fighters," Milburn continued. "We're not on the line pulling the trigger. We are not mercenaries, certainly not by any definition of mercenaries. And there is nothing, this is really important, there is nothing that we do that is not in line with U.S. foreign policy. We are training, equipping and assisting the Ukrainian military. We are not killing Russians here."

He says the new group will last at least as long as the war and there will still be so much to do after, whenever that day comes.