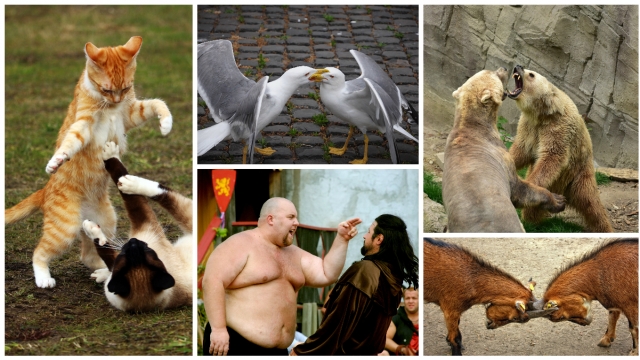 SMS
Fight On Or Give Up? It Comes Down To 1 Brain Circuit
By Evan Thomas
By Evan Thomas
March 31, 2016
Scientists studying fish found one brain circuit that predicts the winner and loser of a fight, and humans have the same circuit.
SHOW TRANSCRIPT

Lots of animals fight, from big predators all the way down to fish. But it turns out winning and losing could have less to do with brawn and more to do with one specific part of the brain.

Studying zebra fish, which feud for tank space, scientists found a brain structure called the habenula that determines the outcome of a fight.

What's more, the researchers could basically flip the switch and make the fish either fight on or give up.

For instance, fish with their losing pathway turned off kept coming back for more.

"The Zebrafish would return to the center of the tank after losing, when normally a losing fish — that is now inferior — would sulk near the edge of the tank," researchers said.

The same brain switch exists in other vertebrates, including humans.

This video includes clips from BBC, Geofratz / CC BY 3.0, The Company of Biologists / CC BY 3.0, Carla Schaffer / AAAS and the U.S. National Parks Service and images from the National Institutes of Health and RIKEN and music by Steve's Bedroom Band / CC BY 3.0.