'Fifty Shades' Is Changing Movies More Than You Know 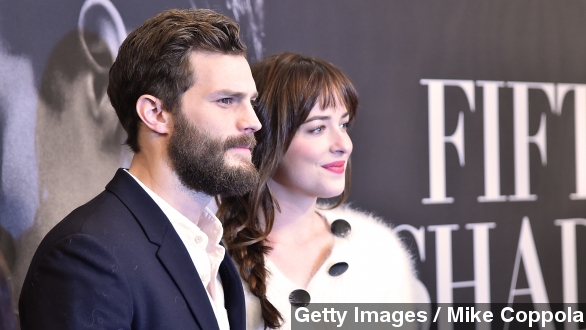 SMS
'Fifty Shades' Is Changing Movies More Than You Know
By Cliff Judy
By Cliff Judy
February 13, 2015
"Fifty Shades of Grey" fever is not only breaking records for online movie ticket sales; it's affecting everything from advertisers to sex toys.
SHOW TRANSCRIPT

For those of you who just couldn't wait to see Christian and Anastasia on the big screen, you aren't alone.

Nearly a month ago, Fandango announced "Fifty Shades" was the fastest-selling R-rated movie in the site's history and forced movie theaters around the country to add showtimes. Again, that was a month ago.

The Wall Street Journal noted Thursday "Fifty Shades" was the No. 4 movie of all time for online ticket sales, trailing only the first "Hunger Games" movie, the second "Twilight" movie and the final "Harry Potter" movie. (Video via Lionsgate / "The Hunger Games")

That's important, as the Journal wrote the majority of ticket sales for travel, concerts and other live events happen online, yet only 13 percent of movie tickets in the U.S. come from online sales, something sites like Fandango obviously hope changes.

That also brings in the advertisers. For instance, Calvin Klein bought up ads in the U.K. for the first time to be shown before the movie starts.

And there are any number of promotions trying to lure in customers or play off the "Fifty Shades" fever from pillows, blankets and naughty cocktails at a Miami theater to a "Fifty Shades of Green" pot promotion in Colorado to an S&M teddy bear. No, guys, your girlfriend probably doesn't want it.

The other industry helped out by the book-turned-movie? Sex toys.

Adult toy experts told The New York Times it's tough to accurately say just how much "Fifty Shades" has helped sales, but as the co-founder of retailer Babeland put it, "It is the biggest moment for our industry in popular culture pretty much ever. We're all sort of preparing for what could be another wave of toys."