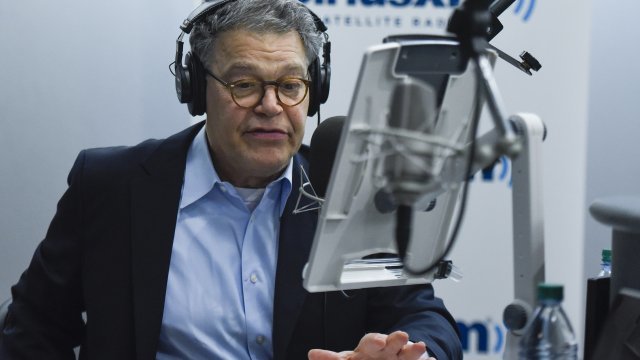 An Army veteran told CNN that Franken groped her during a photo op in 2003. Franken was working as a comedian at the time.

Army veteran Stephanie Kemplin told CNN that Franken groped her during a photo op while she was stationed in the Middle East in 2003. Franken, who was working as a comedian at the time, was visiting American troops on a USO tour.

A spokesperson for Franken told CNN the lawmaker "takes thousands of photos and has met tens of thousands of people and he has never intentionally engaged in this kind of conduct."

Rep. John Conyers said he doesn't want the accusations against him to undermine his colleagues, but is stepping down reluctantly.

TV and radio host Leeann Tweeden said Franken "kissed and groped" her without consent on a 2006 USO tour.

And two women anonymously told HuffPost the Democratic lawmaker touched them inappropriately in separate incidents while he was campaigning for office in 2007 and 2008.

And Lindsay Menz said Franken grabbed her while they posed for a photo at the 2010 Minnesota State Fair. Currently, that's the only alleged incident that took place after Franken became a U.S. senator.

Days before this latest accusation, Franken had apologized but said he wouldn't step down from the Senate.