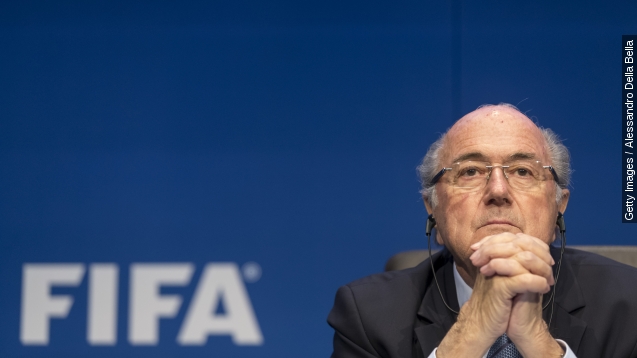 In the wake of FIFA's indictment, the focus has been on its president, Sepp Blatter. Even with his resignation, FIFA's systemic problems still linger.

This was FIFA President Sepp Blatter less than a week ago after winning re-election.

Now, Blatter has announced his resignation, and it's just what some critics had called for. (Video via FIFA)

"The problem is, all the arrests in the world are going to change nothing as long as Blatter is still there. Because to truly kill a snake you must cut off its head, or in this case, its a**hole," John Oliver explained on his show.

But in FIFA's case, cutting off the head only goes so far, which is why the other half of FIFA's announcement Tuesday — sweeping structural reforms — are crucial to changing the organization's image.

In the current setup, the president has a ton of power at his disposal — essentially having the run of FIFA's executive committee, which is comprised of vice presidents and members from 25 different federations.

If you don't recognize some of those flags, it's because a lot of the bodies on the committee aren't exactly soccer mainstays. Federations like the Turks and Caicos Islands, Burundi, Cyprus and the Cayman Islands, which, combined, comfortably fit in the state of West Virginia.

Seven of those nations have never qualified for a World Cup, and three have a majority of their population living below the global poverty line — including the Democratic Republic of the Congo, which is the poorest country in the world on per-capita GDP.

Considering payouts those countries get from FIFA events, it would conceivably be easier for the president to influence the 26 other members of the executive committee, which votes on where to hold the World Cup, instead of the 209-member FIFA congress, which doesn't. (Video via SABC, Arirang)

It's not yet clear what FIFA's reforms will look like, but the man in charge of seeing them through, Domenico Scala, has said nothing is off the table.