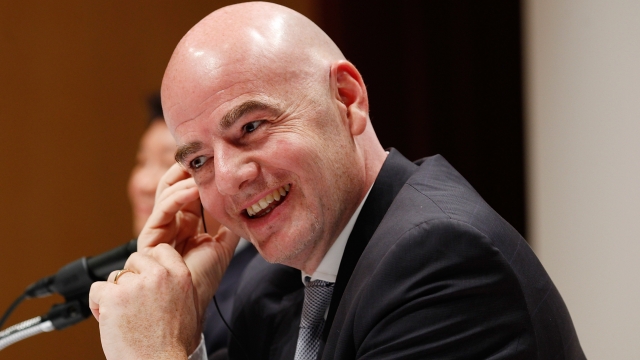 SMS
FIFA's New President Is Already Facing Corruption Allegations
By Carter Woodiel
By Carter Woodiel
May 15, 2016
Gianni Infantino has only been in his post for a few months, but the head of a key FIFA committee has already resigned in protest of new policies.
SHOW TRANSCRIPT

New FIFA President Gianni Infantino has declared FIFA's corruption crisis over, but that hasn't stopped him from facing corruption allegations.

Domenico Scala, who was in charge of FIFA's audit and compliance committee, resigned in protest Saturday in response to reforms passed at the recent FIFA congress.

The reforms gave FIFA's ruling council, which is headed by Infantino, the power to hire and fire the heads of independent committees like ethics, governance and finance. This includes Scala's former position.

And it can do so at any point instead of waiting until the next annual FIFA congress next May. These reforms will last for the next year.

According to Scala, the reforms would allow the council to get in the way of investigations by firing whoever was conducting them, or just threatening to do so until the investigation went away. This makes cracking down on corruption that much more difficult.

The reforms are a bit unexpected. When Infantino was elected to his post in February, analysts expected he would put less power in the hands of FIFA's executive branch, not make a power grab.

For its part, FIFA called Scala's claims "unfounded" and "baseless." The organization says the new rules were put in place so FIFA could more quickly fill vacant positions and fire committee heads who "breached their obligations."

During the congress, Infantino appointed Fatma Samoura as secretary general, essentially his second-in-command. Samoura is the first woman to hold the position, something FIFA is using as evidence it's headed in the right direction.

Scala's deputy will be taking his position for the time being. Given FIFA's past, though, chances seem good this won't be the last corruption allegation Infantino will hear during his presidential tenure.

This video includes clips from RT, BBC, Telemundo and Deutsche Welle and images from Getty Images.