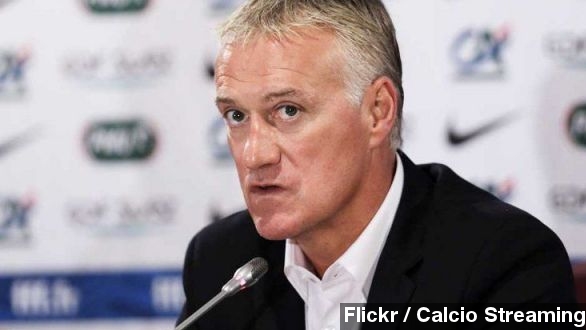 By Jay Strubberg
June 15, 2014
FIFA is investigating whether or not a drone spied on the French national team practicing at their World Cup training facility in Brazil.
SHOW TRANSCRIPT

By now, you're probably familiar with this little device. (Via Flickr / Don McCullough)

But aside from its obvious military uses, there's now an investigation into whether a drone was used to give one team an edge in this year's FIFA World Cup.

France manager ​Didier Deschamps is worried his team may have been spied on when a drone flew over Les Bleus's training facility near their World Cup venue in Brazil. (Via ESPN)

According to The Guardian, some of the French players laughed as the tiny unmanned copter flew overhead. But Deschamps was not very happy about it and asked FIFA to investigate.

"Apparently drones are used more and more. ... It's not up to me. FIFA handles this and has been carrying out an inquiry; we don't want any intrusion into our privacy. It's very hard to fight this these days." (Via CBS)

While it's unlikely this was indeed spying by another team, it's easy to see how Deschamps would be agitated after the team's off-field antics made the French national team the laughing stock of the 2010 World Cup in South Africa.

That's when French players refused to practice in protest when France striker Nicolas Anelka was kicked off the team after a verbal spat with a former coach. The Telegraph reports that protest led to the team director's resignation. (Via BBC)

Deschamps – himself a member of France's 1998 World Cup winning roster – said the past is the past. (Via Flickr / Calcio Streaming)

“You shouldn’t mention South Africa. ... We’re now in a another World Cup, we’re in Brazil and were not going to be judged by what we did four years ago. It’s wonderful to have a good atmosphere here. We have supporters behind the team.” (Via Sports Illustrated)

FIFA has yet to comment on the drone incident.