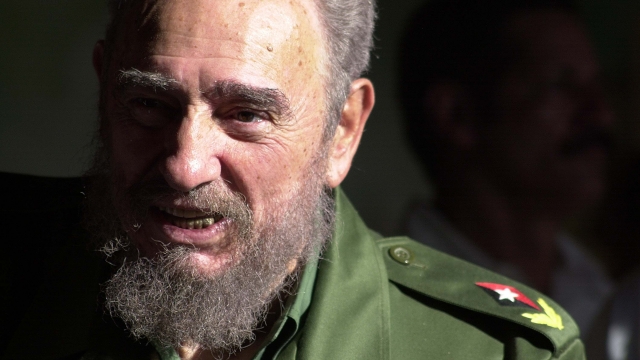 SMS
Hero And Villain: Fidel Castro's Divided Legacy
By Jake Jones
By Jake Jones
November 26, 2016
Some of his ideas were progressive, but he was often considered a controversial ruler.
SHOW TRANSCRIPT

The reactions to Fidel Castro's death are all over the place. To understand why, you have to have some context.

Castro was a political up-and-comer and leftist revolutionary alongside Che Guevara in the 1950s. The two started a resistance movement in 1952 after president-turned-dictator Fulgencio Batista canceled the elections and took control of the government.

Their insurgency eventually won out, and in 1959, Castro drove into Havana to take power.

SEE MORE: Here's What Cuba Has Instead Of Advertisements

Castro's main goal as leader was to spread wealth to Cuba's poorest people. He redistributed farmland and took control of foreign businesses. His efforts to end illiteracy and create universal health care are still discussed by Cuban nationals today.

But Castro was also a controversial figurehead. His support of communism and the Soviet Union bolstered the Cold War and led to the Cuban missile crisis.

When the Soviet Union fell, Cuba went into a deep economic tailspin with food and medical shortages. This, combined with Castro’s oppressive rule, led thousands of natives to leave their country for a safer and freer life.

These refugees urged their U.S.-born children and grandchildren to forget about Cuba. But when safe travel to and from the island became a real possibility, younger U.S.-born Cubanos felt a desire to trace back their roots.

He also removed government restrictions on buying things like computers and microwaves.

President Barack Obama eased tensions with the communist island in 2009. That eventually led to a reestablishment of diplomatic ties in 2015, ending more than 50 years of political conflict.

But Fidel Castro himself remained a divisive figure. Earlier this year, he wrote a letter to Obama, saying "We don't need the empire to give us anything."

Cuba has instituted a nine-day period of mourning ahead of Castro's funeral.

But in the U.S., many Cuban-Americans are celebrating the communist revolutionary's death.