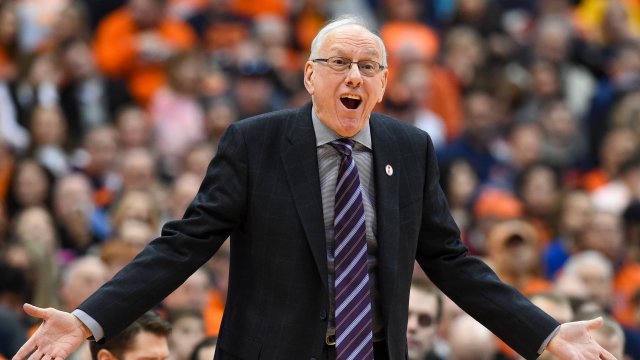 SMS
The March Madness Bracket Was Tough On The Little Guys This Year
By Carter Woodiel
By Carter Woodiel
March 12, 2018
A basketball team winning most of its games isn't always enough to impress the selection committee — especially this season.
SHOW TRANSCRIPT

Every college basketball team dreams of making it to March Madness. But if you're not a big-time school, that prospect is getting tougher.

Most of the talk leading up to this year's bracket reveal had centered around at-large bids: Those are teams the selection committee invites to the Big Dance but didn't win their conference tournament.

Those bids, with fewer and fewer exceptions, are going to big-name programs.

This year's bracket features 36 at-large selections. The sport's six biggest basketball conferences ate up all but five of them. That's less than half as many teams outside those major conferences compared with 2012 and 2013.

St. Mary's plays in the lesser-known West Coast Conference and had 28 wins and 5 losses this year. But that wasn't enough to get them into the tournament.

"St. Mary's had one win against Gonzaga — it was a great win that St. Mary's had, but they didn't play a very challenging schedule, even non-conference," NCAA selection committee chair Bruce Rasmussen said on TBS' selection show broadcast.

Instead, Syracuse was the last team in, despite an 8-10 record in conference play.

"The tournament's based a lot on mediocrity; mediocrity has prevailed," ESPN analyst Dick Vitale said Sunday. "They believe that the elite conferences are the best, so they put in all those teams."

All these teams had their chance, of course. A win in their conference tourney means they're in no matter what. But for more schools than ever, that's becoming the only route to the Big Dance.