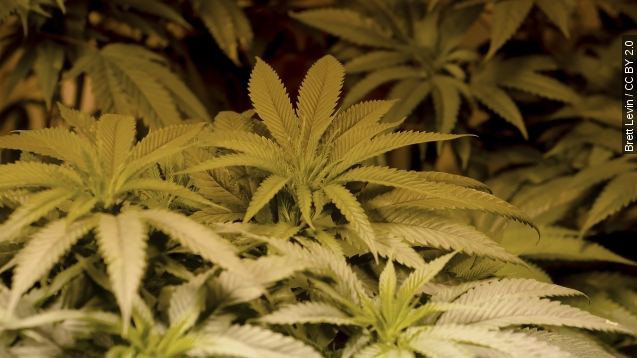 SMS
Few Public Schools See Any Green From Colorado's Pot Tax
By Leah Becerra
By Leah Becerra
September 21, 2015
It turns out Colorado's excise tax on marijuana, which was touted as a way to bring more money to the state's schools, isn't contributing much.
SHOW TRANSCRIPT

Last year, taxes collected from marijuana sales in Colorado led to $13.3 million for schools. But not too many actually saw any green.

Especially when compared to this year's huge haul from only January to May, which brought in $13.6 million. Some believe this year's total could reach more than $30 million, but even that money won't be evenly distributed. (Video via KHON)

That's because if the state collects $40 million or less from an excise tax, all that money has to be dispersed through the Building Excellent Schools Today, or BEST, grant program.

Which means Colorado's schools have to compete to see any money at all from marijuana taxes.

The first round of grants using BEST funds were given out in May, with 26 public school projects being awarded funds. Of Colorado's 178 districts, only 22 saw a check.

To be fair, not every district can even receive funds from marijuana. That's because some areas voted against the sale of recreational marijuana, meaning they can't benefit from the special tax.

Even so, the BEST grants are funded by more than just marijuana. Actually, the sales tax from the drug doesn't even make up that much of the whole.

Funding for BEST grants also comes from state Powerball profits as well as State Land Trust Funds. The Colorado Springs Gazette writes that "the latter generates up to 90 percent of the program's funding. Marijuana taxes account for less than 1 percent of the pot."

So, while some Coloradans likely voted with schools in mind when they passed a 15 percent excise tax on marijuana back in 2013, most schools have yet to benefit. (Video via YouTube / Prop AA)

This video includes images by Getty Images and Brett Levin / CC BY 2.0.