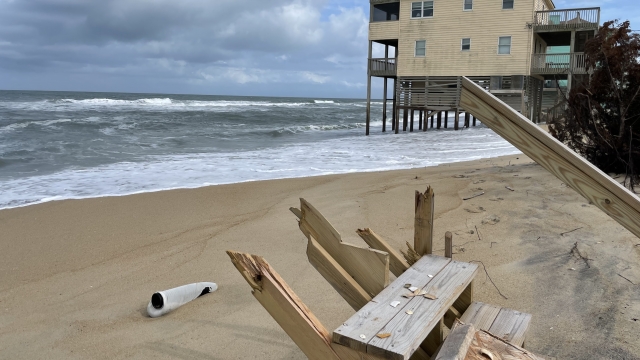 What’s the story behind that video of a house washing into the ocean in North Carolina?

It was actually one of three homes this year destroyed by erosion, all in Rodanthe, a part of the outer banks.

Newsy discovered why coastal homeowners across the country are often stuck with no good option but to let their houses succumb to the growing threat of erosion.

Reide Corbett is the executive director of the Coastal Studies Institute at East Carolina University.

"We're going to see more houses like that fall in the ocean moving forward, not just on the outer banks, but around the world," he said.

Lance Goldner's home a little up the coast could be next to go.

"My family wanted to find a beach cottage that we could use a few weekends and rent it out for the rest of the year," he said. "And it hadn't turned out too well."

The home is one of the last ones standing on a block of the outer banks eroding away.

Before this was an area of condemned homes, things looked very different here just a few short decades ago. Where I’m walking you would’ve seen swimming pools here. And the beach extended all the way out to the middle point of that pier.

The ocean chomps away up to fifteen feet of shore each year on parts of the outer banks.

Rodanthe is what scientists call an erosion hot-spot.

"It's these areas that have rates two or three times higher than the rates of erosion in that same region," said Corbett.

Coastal erosion hot-spots are all over the country.

"Erosion isn't new for coastal systems, for coastal communities. But they haven't faced it with additional increasing sea level rise with increased number of storms, increased intensity of some of these storms buyers may be unaware their home sits on a place of peril," said Corbett.

NEWSY'S PATRICK TERPSTRA: If you had known that, then?

LANCE GOLDNER: I would have walked away from this, positively. I wouldn’t risk my family's money.

Home buyers can look up the odds of a catastrophic flood. Erosion potential is a bigger mystery.

FEMA does not map erosion hazard areas, even though the U.S. Geological Survey publishes the data.

When we asked FEMA about that, the agency told us it has a pilot study underway to map erosion threats. But, so far only for the northeast coast.

North Carolina does not require disclosure of erosion threats.

It falls on real estate agents like Rick Kinne to know the threat, and talk about it.

"We look at that house sitting on the beach and we say, yes, this is great. But there's a real risk of this being taken by the ocean. And we've got many examples of that happening, especially recently," said Kinne.

Kinne says at the time Goldner bought with an agent in 2003, that discussion about erosion didn’t always happen.

"It wasn't as prevalent as what it is now. And you didn't have you know, you don't have the stories of homes actually being taken, you know, by the ocean," said Kinne.

After the sale, when owners eventually realize their homes are in trouble, some will elevate, move or dismantle the house.

But insurance won’t cover the cost.

And as Goldner will tell you, there’s still the mortgage.

Danny Couch, a County Commissioner on the outer banks, says grants to help homeowners have proven hard to get.

Adding sand back onto the shore can help, but beach nourishment is temporary, and reserved for places with the greatest need.

FEMA once had a short-lived initiative to pay homeowners to move or remove their homes in erosion hot spots.

But Congress let the costly program, known as Upton-Jones, sunset in the mid 1990s.

So, for many like Lance Goldner, the best plan may be to do nothing at all.

If the ocean consumes his house, at least then he could be eligible for a $250,000 pay-out from FEMA’s National Flood Insurance Program.

"The only way the flood insurance will pay is if it falls into the ocean, which is a terrible way to pay off," said Goldner.

It's incentive for people living on the edge to surrender their dream homes to the sea.