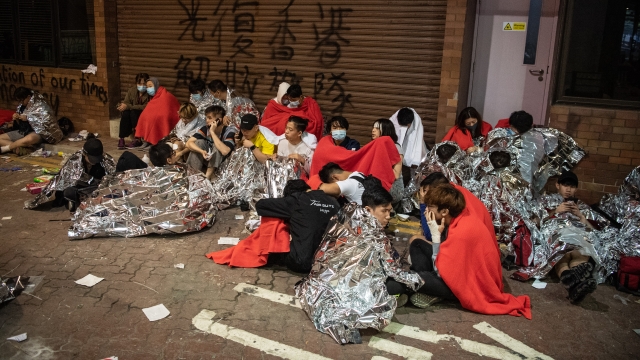 Only a small group of protesters are reportedly still stuck inside Hong Kong Polytechnic University.

Those protesters have been clashing with police for several days. Anti-government demonstrators set up a heavily fortified camp on the university campus last week. Many of the protesters were reportedly college and high school students.

Police ordered the protesters to evacuate the campus by Sunday night. But many stayed behind. Those protesters, armed with bows and arrows and gasoline bombs, clashed with riot police, who responded with tear gas, water cannons and rubber bullets. Police warned that they'd switch to using live rounds, if necessary.

When protesters initially tried to flee the campus, they were either arrested or driven back by tear gas. Police later let protesters under the age of 18 leave without being detained but arrested everyone else. Authorities said they arrested 1,100 people at or near the school just on Tuesday.

Roughly 50 protesters reportedly remained inside the campus on Wednesday. Multiple outlets report police have surrounded the school and are waiting to take the protesters into custody once they try to leave.