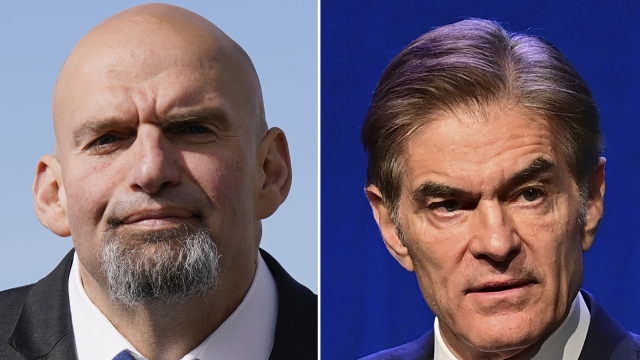 Democrat John Fetterman and Republican Mehmet Oz will meet Tuesday for one of the most highly anticipated debates of the midterm elections as they wage a fierce contest for a U.S. Senate seat from Pennsylvania that could decide control of the chamber and the future of President Joe Biden’s agenda.

Much of the focus is on Fetterman, who has spent the past several months fending off an escalating series of attacks from Oz about his health and fitness for office. Fetterman, who is Pennsylvania’s lieutenant governor, had a stroke in May, a health scare that was so severe he said he “almost died.”

But he has insisted he is prepared for the demands of the Senate. Since his stroke, Fetterman has struggled at times to speak clearly in public events. Independent experts consulted by The Associated Press, however, said he appears to be recovering remarkably well. He will use closed-captioning during the debate to help him process the words he hears.

Still, Tuesday’s debate could prove to be a decisive moment in a race that represents the best chance for Democrats to flip a Republican-held Senate seat this year. It will provide an opportunity for Fetterman to prove that he has the stamina for the job and shift the focus to Oz, who Fetterman has argued is a carpetbagger from New Jersey with no understanding of the state. Oz, meanwhile, will have a high-profile chance to unite Republicans and appeal to moderates who could decide the race.

The high-stakes debate — the first and only in the contest — comes just two weeks before Election Day in what polls say is a close race to replace retiring two-term Republican U.S. Sen. Pat Toomey. It’s the only major statewide debate happening this year in Pennsylvania since Democrat Josh Shapiro and Republican Doug Mastriano couldn’t reach an agreement on terms for a gubernatorial debate.

Fetterman has grown as a national brand thanks in part to his extraordinary height, tattoos and unapologetic progressive stances. But the 53-year-old Pennsylvania Democrat's health has emerged as a central issue over the election's final weeks, even as candidates elsewhere clash over issues like abortion, crime and inflation.

Oz, trailing in the polls, had pushed for more than a half-dozen debates, suggesting that Fetterman's unwillingness to agree to more than one is because the stroke had debilitated him. Fetterman has insisted that one debate is typical — two is more customary — and that Oz's focus on debates was a cynical ploy to lie about his stroke recovery.

Meanwhile, Fetterman’s lead in polls has shrunk as Oz's Republican allies poured tens of millions of dollars into a perennial battleground state that President Biden won by just 1 percentage point in 2020.

Fetterman's allies fear that the 60-minute live televised debate may represent a no-win situation for the Democrat, even if the typical audience for a Senate debate is quite small. Much of the attention will likely focus on how Fetterman — who is blunt and plainspoken — can communicate in a high-pressure situation.

His campaign has acknowledged the built-in disadvantage of putting Fetterman on stage with Oz, a longtime TV personality who hosted “The Dr. Oz Show” weekdays for 13 seasons after getting his start as a regular guest on Oprah Winfrey’s show in 2004.

“This was always going to be an away game for John Fetterman,” said Mustafa Rashed, a Democratic political consultant based in Philadelphia.

The debate host declined to allow an AP photographer access to the event, and the AP declined to accept handout photos.

Fetterman's stroke happened just days before his resounding victory in the Democratic primary. Recovery kept him out of the public eye for much of the summer, though the campaign said he was meeting with aides, taking long daily walks, driving and doing household errands.

Oz, who was endorsed by former President Donald Trump, barely survived his own primary, beating Republican rival David McCormick by 951 votes out of more than 1.3 million cast after a dayslong recount.

Fetterman has rebuffed calls to release medical records or let reporters question his doctors, but last week he released a note from his primary care physician, who wrote that Fetterman is recovering well, shows no cognitive effects and "can work full duty in public office.”

Fetterman acknowledges that he continues to stumble over the occasional word and that a common condition of his stroke — called auditory processing disorder — means that his brain's language network cannot quickly and accurately turn sound into meaning. That requires him to use closed-captioning during interviews and at the debate.

Malcolm Kenyatta, a Democratic state lawmaker who is campaigning for Fetterman after unsuccessfully challenging him in the primary, said Fetterman should talk about his priorities as a senator and be selective about which of Oz's attacks to respond to.

Fetterman should “to the extent possible ignore the clown show that’s happening on the other side and, if he does that, I think that's a win,” Kenyatta said.