A Weekend Full Of Festivities Marks The Queen's 70-Year Reign 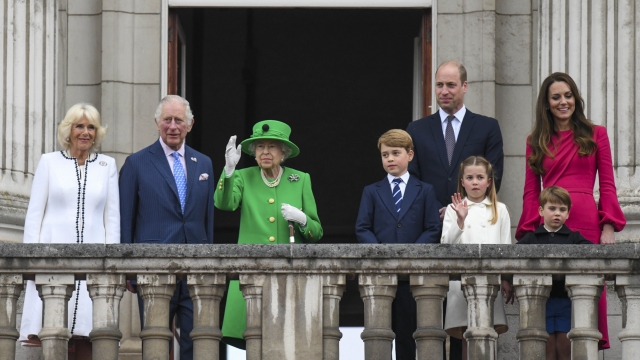 SMS
A Weekend Full Of Festivities Marks The Queen's 70-Year Reign
By Luke Hanrahan
By Luke Hanrahan
June 5, 2022
The 96-year-old monarch has had problems moving around recently and canceled some Jubilee appearances over the weekend.

The queen appeared on the balcony of Buckingham Palace for the final act of the Platinum Jubilee.

There was rapturous applause from a crowd that was surprised as well as delighted to see her after so many concerns about her health. She was accompanied by those who will succeed her.

It was a day in which millions of Brits took part in the same event to celebrate Queen Elizabeth II's 70 years on the throne. The Big Platinum Jubilee Lunch took place on streets across the nation.

"I have to say I'm a bit of a royalist, so I do love the Queen, I think she's brilliant and everything she stands for," said U.K. resident Hannah Gibson. "The whole family, really love them, so nice to get behind it."

"I mean it is extraordinary that in 70 years — most people at this table will not have been born 70 years ago, they have not known a life without her as our queen and head of state," said U.K. resident Clare Chalmers.

"Well, we certainly won't have another Platinum Jubilee for a very long time, and I think people do feel that sense of gratitude that she's held us all together. And she's above the fray and embraces us all," said U.K. resident Charles Mackworth-Young.

More than 85,000 Brits signed up to host Big Jubilee Lunches, with Prince Charles and Camilla joining a feast at the Oval Cricket Stadium in South London. And Princess Alexandra, the queen's cousin, helped judge a community bake-off competition at one gathering, featuring Jubilee-themed cakes.

In central London, tens of thousands enjoyed the spectacle of a Jubilee royal pageant — including Prince William, Kate, George, Charlotte, and a very animated 4-year-old Louis.

These national celebrations will go down history, recognizing a monarch who continues to bring Brits together.