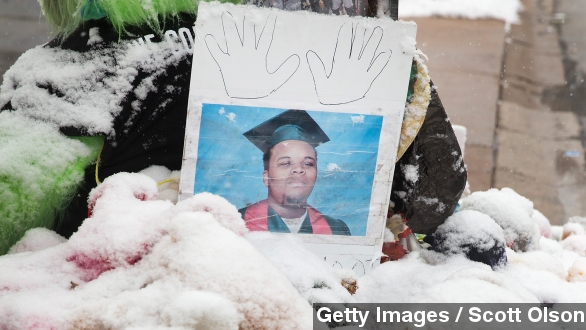 By Jasmine Bailey
November 16, 2014
The grand jury deciding whether to indict Officer Darren Wilson for the shooting death of Michael Brown may announce its decision this week.
SHOW TRANSCRIPT

Following months of protest in Ferguson, Missouri, much of the country is on edge as a grand jury decision deciding Officer Darren Wilson's fate is expected any day.

KMOV: "From Boston to Los Angeles, police departments are preparing for large demonstrations. Las Vegas police joined with pastors this weekend to call for restraint when the decision comes."

And in Ferguson, residents are bracing for what could be dangerous protests if the grand jury chooses not to indict Wilson, who is currently on paid leave.

In St. Louis, business look to be preparing for a hurricane rather than protests. Windows have been boarded up to minimize damage and deter looting.

CHARLIE BRENNAN VIA FOX NEWS: "There is a lot of anxiety in St. Louis about the unknown. It's kind of like Y2K or the approaching storm off the coast. You don't know exactly what's going to happen."

The grand jury of 12 people has been looking over evidence collected by the county prosecutor's office for nearly three months. There are several possible outcomes to the hearings, so let's take a look.

The first is that the grand jury could indict Wilson, sending the case to trial. Charges could range from the most severe charge of first-degree murder to the much lighter charge of involuntary manslaughter.

From the outside, it's hard to know how much evidence there is against him. Accounts of what happened right before Brown was shot differ drastically. Even some eyewitnesses don't describe the same scene. (Video via KTVI)

New details, like dispatch audio from moments after the shooting, are still being released.

"Get us several more units over here. There’s gonna be a problem."

The St. Louis Post-Dispatch also obtained footage of Wilson and two other officers about two hours after the shooting. They're reportedly leaving the police station and heading to the hospital to get treatment for Wilson after he claims he was attacked by Brown.

Both recordings were only released on Friday, so there's likely much more evidence the grand jury has seen that the public still hasn't. That makes it hard to predict whether Wilson will be indicted, and if so, on what charge.

Then there's the alternative: Wilson isn't indicted, avoids arrest and could possibly rejoin the Ferguson police force, though as the International Business Times points out, his legal troubles would still be far from over.

MSNBC: "If he is not indicted, legally he does have his job. ... He still would have to go under the review of an international investigation which could find cause for him to be fired or not."

Then there are the myriad other investigations Wilson could be subject to. Even if the grand jury doesn't bring charges, the state attorney general still could. And the U.S. Justice Department could bring its own charges if it finds Brown's constitutional rights were violated. (Video via YouTube / World Reporter)

Then there's a whole other legal battleground to consider. The officer might have to face Michael Brown's family in civil court.

MEL ROBBINS VIA CNN: "That would be a civil case where they would be looking for monetary damages. ... They could be suing for not only wrongful death but also for intentional infliction of emotional harm based on how they handled Michael Brown's body at the scene."

After the shooting, Brown's body was left facedown in the street for four hours — too long, according to Ferguson Police Chief Thomas Jackson, who apologized to Brown's family in a video released in late September.

The grand jury has until Jan. 7 to reach a decision, but sources close to the investigation say an announcement could come this week.