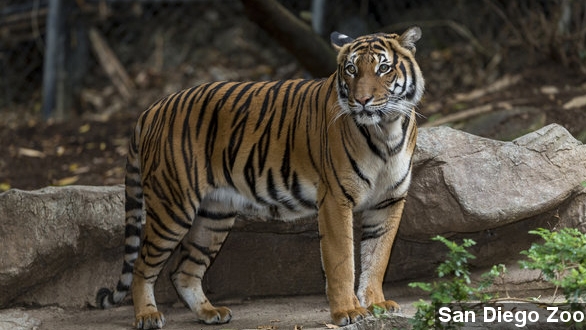 A female tiger was fatally mauled by her intended mate at the San Diego Zoo over the weekend.

San Diego zookeepers thought the timing was right when they introduced two tigers for mating.

But now the zoo says that quickly changed, and the male tiger fatally mauled his intended mate. She died Saturday of breathing difficulties and neck injuries.

And while San Diego Zoo officials say the incident is a first for their facility, they were also quick to point out it's not unprecedented.

"A zoo spokeswoman says similar deaths often take place in the wild and that the zoo does what it can to try to prevent deaths of this nature..."

"Tigers, like many large carnivores, can have some very aggressive behaviors as part of their breeding behavior."

Zookeepers say they couldn't intervene in time to save the 4-year-old female tiger, named Tiga Tahun.

They say they're saddened and surprised by what happened.

"Zoo staff says the pair had become familiar with each other's scent, even touched noses, which is why they felt it was the right time for them to breed."

According to World Wildlife Fund, there are only an estimated 500 Malayan tigers in existence. Native to the Malay Peninsula and the southern tip of Thailand, they're classified as endangered. (Via Wikimedia Commons / Photo by Greg Hume)

Last month, a male lion fatally bit a 5-year-old female lion at the Dallas Zoo. That happened in front of visitors, but the incident in San Diego, thankfully, happened early in the morning when there were no zoo guests.

Now, the zoo is investigating what could have gone wrong. ​San Diego zoo says it's had five litters of Malayan tigers born at the facility since 1999.

The male tiger — named Connor — is now San Diego Zoo's only Malayan tiger. It's not yet clear whether he'll continue to mate after this weekend's incident.