Why Some Female Lawmakers Decided To Wear White For Trump's Address 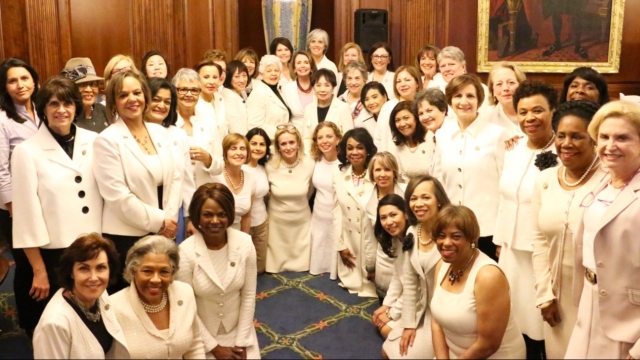 As President Trump delivers his address to a joint session of Congress on Tuesday, he may notice quite a few lawmakers wearing white. And that's by design.

Democratic congresswomen are doing so in a nod to the women's suffrage movement.

Several lawmakers tweeted that they decided to wear one of the colors of the movement to "oppose Republican attempts to roll back women's progress."

Some lawmakers opted to wear purple — another color associated with women's suffrage.

The official colors of National Woman's Party, which was previously the Congressional Union for Woman Suffrage, were white, purple and gold.

House Democratic leader Nancy Pelosi told MSNBC's Andrea Mitchell Tuesday, "It's not even a protest. It's a statement of values."

According to tweets from some participating, those values include equal pay, reproductive rights and paid family leave.

The symbolism won't be lost on Hillary Clinton. She wore white for pivotal moments during the campaign — like when she officially became the first female to win the nomination of a major American political party.

She also wore the color for her final debate with Trump.

The former secretary of state's supporters even wore white to the polls, popularizing the hashtag #WearWhiteToVote.

Clinton chose to wear a black and purple pantsuit for her concession speech. She told women, "I know we have still not shattered that highest and hardest glass ceiling, but someday, someone will — and hopefully sooner than we might think right now."

Clinton also made a silent statement with her white pantsuit as she watched her opponent take the oath of office.