FEMA Is Housing Hurricane Survivors, But Demand Is Sky High 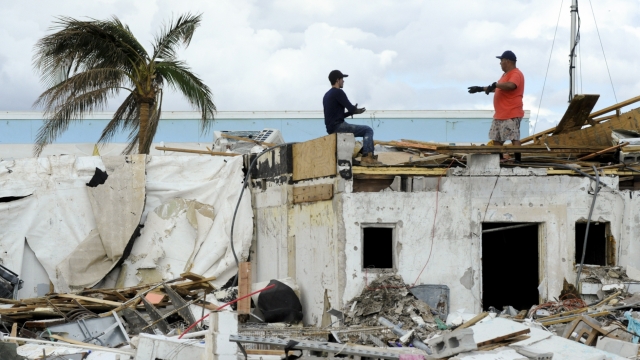 Floridians have taken up residence in parking lots, where a sense of community is helping keep spirits up as many look for housing.

A Walmart parking lot has become more than just a place to put a car in the month since Hurricane Ian ravaged Fort Myers.

Like many there, Hoffman and her husband's rental home was destroyed.

"I washed my husband's hair this morning in a bucket with bottles of water and shampoo," Hoffman said.

The fierce category four hurricane forced thousands of Floridians out of their homes and brought in thousands more for clean up and construction, creating a shortage in housing for Floridians displaced and those who there to rebuild.

"There aren't any hotels," Hoffman said. "Everything is booked, including FEMA-provided hotels, and the hotel that we did try to book ripped us off."

Jimmy Finch runs an organization called Cultivating Hope. He saw a need, dug into his pockets and drove down from Tennessee just days after Hurricane Ian made landing. He cooks for the crowd in the parking lot.

"I just fill it up and keep cooking till they stop coming," Finch said.

Finch provides the meals for free, saying workers are his main customers. Many of them are sharing hotel rooms with up to four people, staying a three-hour drive from the island they're cleaning up.

"I think the greatest need is housing, because I've been here 25 days and I'm not going to tell you how many times in that 25 days I've showered," Finch said.

A Fort Myers mobile home neighborhood was completely destroyed by Hurricane Ian, taking retirement plans and funds with it.

Finch says while his decision to stay and help is a choice, it's not an option for others on a tight budget.

"All along this parking lot we had port-o-lets or porta potties... with sinks to wash your hands," Hoffman said. "There were showers, there was laundry. It's all gone. I mean, you blinked and it was gone."

Many rely on public restrooms and the kindness of others.

"I showered at my husband's work," Hoffman said. "He got permission from his boss, but before that, you kind of just take those sink baths."

FEMA says there is a high demand for short-term lodging for Hurricane Ian victims. The program is providing housing for more than 2,100 households and recently approved direct temporary housing for uninhabitable homes, but it's a small fraction compared to the amount of workers there and the 788,000 in Lee County alone.

"FEMA's direct housing program will not be able to meet every households needs, so I'm also announcing a state-led housing mission to provide travel trailers and recreational vehicles to impacted Floridians who may not be eligible for FEMA's program," Florida Gov. Ron DeSantis said.

But as long as there is a need, people sleeping at the parking lot are helping each other out, lifting each others' spirits during one of the darkest chapters of their lives.

"I never would have imagined that at 51 years old, everything that I built in my life, it's all gone," Hoffman said.