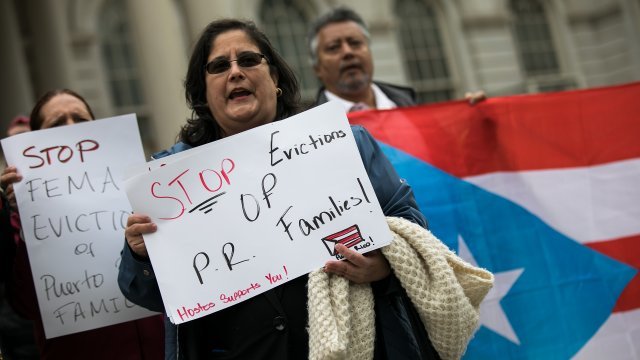 SMS
Judge Extends FEMA Housing For Puerto Rican Hurricane Survivors
By Gabrielle Ware
By Gabrielle Ware
July 1, 2018
The program was scheduled to end Saturday, but now it will remain in effect at least through Tuesday.
SHOW TRANSCRIPT

Hundreds of Puerto Ricans living in temporary housing following hurricanes Maria and Irma will get to stay at least a few days longer.

A federal judge temporarily blocked an evacuation order by the Federal Emergency Management Agency that would have required nearly 1,800 people to move out of hotels and motels on Sunday.

FEMA announced that the Transitional Sheltering Assistance program would end June 30. But a judge ordered the program be extended. The new evacuation deadline is midnight Tuesday or check-out time Wednesday.

A Latino rights group filed a lawsuit to stop the evacuation. A lawyer with the group said, "There is no question that FEMA's response to Puerto Ricans after Hurricane Maria has been woefully inadequate and unlike responses to other natural disasters experienced in the U.S."

FEMA's statement said it has spent more than $432 million on providing shelter for the displaced and "a total of 97 percent of those enrolled in the program have successfully transitioned to more permanent housing."

A hearing on next steps for the program is scheduled for Monday.