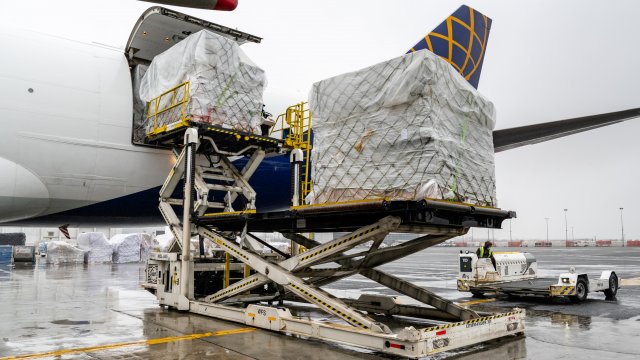 The U.S. is airlifting shipments of crucial medical gear to backstop hospitals overwhelmed by the coronavirus pandemic.

FEMA and the United States have been coordinating flights to deliver medical supplies in bulk to facilities desperately in need of equipment in the fight against COVID-19. This program is dubbed Project Airbridge.

Private health care companies are working with the federal government to ship in large quantities of respirators, masks, gloves and other protective gear from factories overseas. The agency has chartered at least 20 cargo flights so far, focusing on heavily hit areas like New York City, New Orleans and Chicago.

Many of these supplies are coming from factories in China, which have been ramping up their production of medical equipment. China was initially accused of hoarding medical gear during the beginning of the viral outbreak, but the country has been shipping out tons of protective equipment to other countries as it begins to recover from the virus.

Even as the U.S. leans on imports to supply overtaxed hospitals, the White House is taking steps to block exports of those same supplies.

During a press briefing, President Trump told reporters: "We need these items immediately for domestic use. We have to have them."

President Trump said last week he'll use the Defense Production Act to keep medical gear in the country. The move could keep most U.S.-produced protective equipment from being sold overseas — but might also spark similar reprisals from other countries.

The remaining cargo shipments chartered by FEMA are expected to arrive in the U.S. over the next few weeks. President Trump has suggested the program could soon expand to just over 50 flights from the current 20.