FEMA Says It Did Not Adequately Plan For Hurricane Maria's Devastation 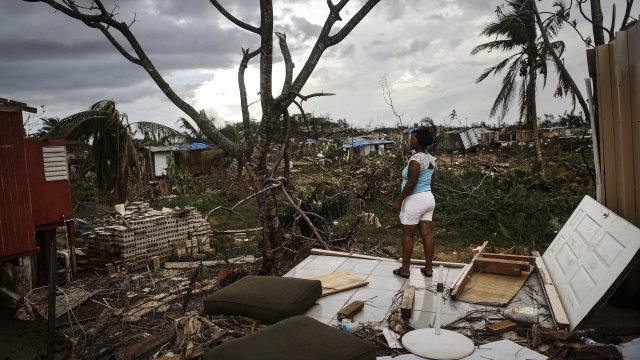 SMS
FEMA Says It Did Not Adequately Plan For Hurricane Maria's Devastation
By Katherine Biek
By Katherine Biek
July 13, 2018
The FEMA report noted the timing of Hurricanes Harvey, Irma and Maria led to a number of logistical problems.
SHOW TRANSCRIPT

FEMA acknowledged it was underprepared for Hurricane Maria to make landfall on Puerto Rico last year.

The agency issued its after-action report Thursday on the 2017 hurricane season, which featured three major storms hitting the U.S. in quick succession. The report noted the timing of Hurricanes Harvey, Irma and Maria led to a number of logistical problems.

For Maria specifically, FEMA's report said plans were more suitable for a tsunami or earthquake hitting Puerto Rico, not a major hurricane.

When the storm made landfall, FEMA said its Puerto Rico warehouse was severely depleted. That's because it had moved most of the supplies being housed there to the U.S. Virgin Islands following Hurricane Irma.

Homeland Security Secretary Kirstjen Nielson, who oversees FEMA, said in a statement, "2017 taught us that we need to further strengthen the Nation's ability to rapidly stabilize critical lifelines."

Officials previously reported that Maria, Harvey and Irma caused a combined $265 billion in damages, helping to make 2017 the most expensive year on record for disasters.