FedEx And UPS Try Not To Repeat Last Christmas' Delays 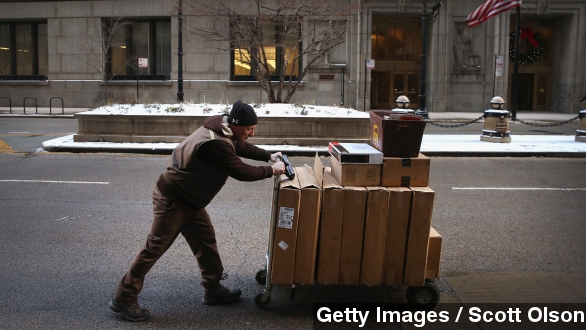 SMS
FedEx And UPS Try Not To Repeat Last Christmas' Delays
By Steven Sparkman
By Steven Sparkman
December 22, 2014
The shipping giants say they've made vast improvements over last year, when delays kept many customers from getting their Christmas orders on time.
SHOW TRANSCRIPT

We're probably all guilty of putting off some of our Christmas shopping until the last minute. But while that used to result in a panicked rush to a crowded shopping mall, these days you're more likely to just go online.

Last year, FedEx and UPS learned the hard way not to underestimate people's urge to click "order" in late December.

NBC reporters said, "For the shipping giants today, it is the nightmare after Christmas."

"FedEx and UPS scrambling to deliver late packages that didn't make it in time for Christmas," said

ABC's Alex Perez asked one UPS customer, "You expected guaranteed delivery before Christmas, have your gifts on time. What did you get instead?"

"A bunch of runarounds," she said.

The companies blamed bad weather and a bigger-than-expected spike in online sales for the delays. But they've had all year to improve and are giving customers a peek inside their logistics operations.

UPS expects Monday to be its busiest day of the year, but says it's hired twice the number of seasonal workers and spent half a billion dollars on infrastructure to make sure the estimated 34 million packages move smoothly.

FedEx says it's invested in contingency planning and has a 15-person meteorological team keeping an eye on bad weather so the company can respond to closed shipping routes before the snow starts falling. Its busiest day was last Monday.

The revamps seem to be working. The Washington Post reported earlier this month that during Thanksgiving week, both companies were between five and 10 percent more likely to get packages to their destinations on time. One shipping analyst said, "The carriers are at the top of their performance level."

But the carriers also aren't making any guarantees. In an interview with CNN, a UPS contingency manager turned down several opportunities to say, "Not this year."

CNN's Cristina Alesci asked, "Is the idea 'Get the package delivered at all costs'?"

Alesci later said, "From what you described, I should never get a package late."

So, if you find yourself browsing Neiman Marcus or Banana Republic online and notice the cutoff for guaranteed Christmas delivery is Tuesday, just remember: for all their logistics, UPS and FedEx still can't control the weather.