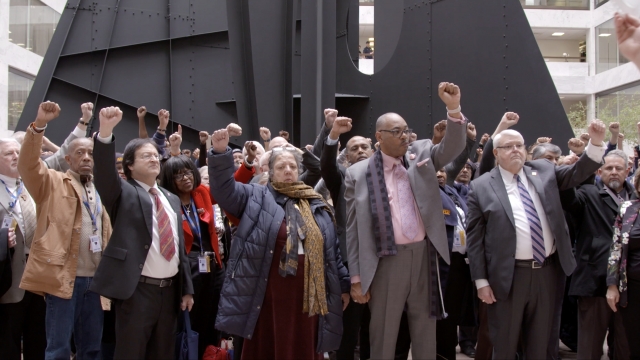 Federal workers who were furloughed or worked without pay during the government shutdown say they continue to worry about their financial futures.

Federal workers who were furloughed or working without pay during the longest government shutdown in history are still in recovery mode as lawmakers work to avoid another shutdown.

"I am not going to be buying a place in DC anytime soon it looks like," said Ryan Baugh who is a federal employee and a union representative for the American Federation of Government Employees. "I could not make a big decision like that and you know take on a mortgage while there was so much uncertainty and honest there still is a lot of uncertainty."

Newsy followed up with Ryan Baugh, who we spoke to back in January during the shutdown. He's decided to put off major life financial decisions until he knows his paycheck is no longer up in the air.

"It's disappointing, maybe it's for the best," Baugh added. "I don't know maybe there's a plan. But right now I'm just focusing on moving and making the best of things and just hoping and working towards and making sure this doesn't happen again and that the work that we do is valued."

Political leaders say they've come up with a compromise plan that would secure nearly $1.4 billion dollars for border fencing and fund the remaining 25% of the government through September of this year. Federal workers say they remain cautiously optimistic the president will sign the deal but hope that political leaders leave their paychecks out of budget negotiations in the future.

"I'm not spending money if it's something that can hold off then it will wait," said Ronetta Harris who was furloughed during the partial government shutdown. "My bills are paid, they're current as of now and I have a savings account and hopefully I won't have to touch that. But I'm just cautious of my spending at this point. Trips vacations for the summer have been cut because I don't know what the outcome of this will be."

Union leaders singled out the President during a silent protest on Capitol Hill this week calling for an end to future government shutdowns which they say hurts hundreds of thousands of federal workers. Many workers dipped into savings to pay for expenses during the lapse in funding. Although a majority of those workers received back pay, some are still coping with the toll the event took on their financial health.

"Many of them still don't have their full paychecks, we had people in Census that didn't get the first dime until last Friday, they went six weeks without one penny to their name," said J. David Cox, the union president of the American Federation of Government Employees. "Without one penny because of Donald Trump," he added. "And I'm going to say that over and over because of Donald Trump, the billionaire begrudged a little GS4 probably a $35,000 a year employee having their paycheck because he wanted to hold them hostage."

The President has reportedly signaled he may sign the bipartisan legislation but the White House initially sent mixed signals as to whether Trump would support the compromise bill. Funding for parts of the federal government expires at midnight on Friday.