Martin Shkreli Is Out On Bail, But The Feds Are Trying To Change That 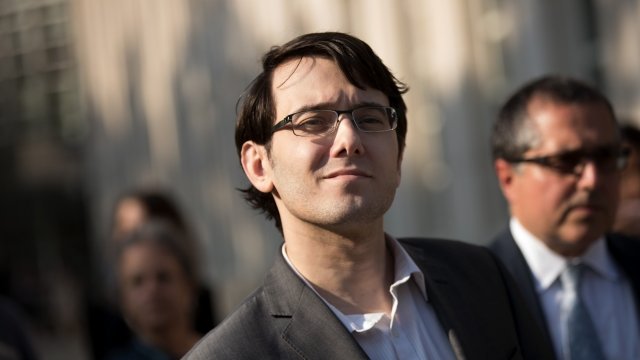 Federal prosecutors argue some social media posts and other comments suggest Shkreli is a danger to the community.

Martin Shkreli has been out on bail. But federal prosecutors want to change that.

A jury found the former hedge fund manager guilty on two counts of securities fraud and one count of conspiracy to commit securities fraud. He's been free while awaiting sentencing.

But prosecutors argue some of Shkreli's social media posts and other comments suggest he's a danger to the community.

Shkreli told his Facebook followers in a now-deleted post to "grab a hair" from Hillary Clinton's head during her book tour. And he said he'd pay $5,000 per hair.

Shkreli allegedly wrote in a letter to his employee's wife, "I hope to see you and your four children homeless."

In a letter to the judge overseeing the case, prosecutors claimed the Secret Service upped its resources in response to the threat because there's a "significant risk" that someone will take the offer seriously.

Shkreli is out on a $5 million bond after he was convicted of lying to investors, withdrawing too much money for himself from his businesses and trying to manipulate stock prices.

Shkreli's sentencing date hasn't been set. As for the post about Clinton, he said, "It was just a prank."