Federal Officials Are Considering Whether Bump Stocks Should Be Banned 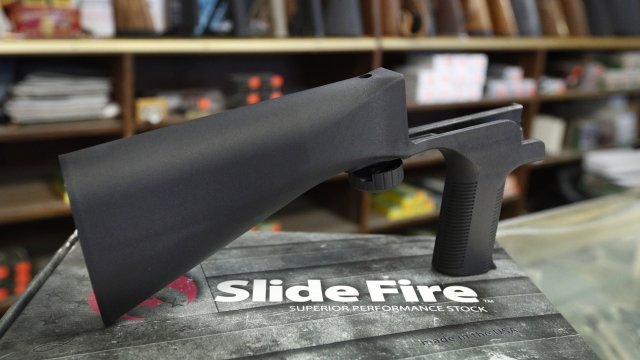 The DOJ and ATF are looking to clarify whether certain bump stocks devices can be defined as "machine guns," which are tightly regulated.

Federal officials are taking a first step toward determining if bump stock devices should be banned.

The Department of Justice and the Bureau of Alcohol, Tobacco, Firearms and Explosives announced the move Tuesday.

The agencies said in a joint statement they're looking to clarify whether certain bump stock devices can be defined as "machine guns," which are tightly regulated under federal law.

Republicans are attaching the bipartisan Fix NICS Act to a separate proposal that would treat concealed carry permits like driver's licenses.

As Attorney General Jeff Sessions put it, "Possessing firearm parts that are used exclusively in converting a weapon into a machine gun is illegal, except for certain limited circumstances. Today we begin the process of determining whether or not bump stocks are covered by this prohibition."

A bump stock can be attached to a semi-automatic weapon to make it fire faster and simulate a fully automatic weapon. But, because the device doesn't mechanically alter the gun to fire automatically, they are legal under current federal law.

Authorities say the gunman who killed 58 people in Las Vegas used bump stocks to quickly fire into the crowd of concertgoers from his Mandalay Bay hotel room.