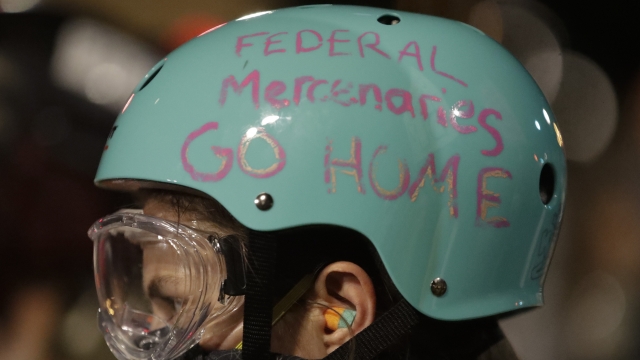 Federal agents continue to clash with protesters in Portland, Oregon, and renewed rage over police violence spurred more protests in Seattle, Austin and Louisville this weekend.

And while the Trump administration is facing multiple federal investigations and several lawsuits, advocates and district attorneys are raising the stakes by threatening to press criminal charges against federal agents.

Miriam Krinsky, a former prosecutor in California, now works with city prosecutors across the country to provide support and enact criminal justice reform.

Despite this criticism and potential legal action, Trump administration officials show no signs of changing course.

KRINSKY: "No one would question their right to prosecute that law enforcement officer, who in the case, tragically, of George Floyd, for over eight minutes took someone's life away in full public view. We don't question the right of a DA to engage in that circumstance, nor should we question their right to equally protect citizens of their community when a federal agent is engaged in the exact same conduct."

Acting DHS Secretary Chad Wolf tweeted over the weekend, "Criminals assaulted FEDERAL officers on FEDERAL property…and the city of Portland did nothing."

It's important to mention, while the president has alluded to federal officers and to civil unrest in cities like Chicago and Baltimore, these officers are not supposed to have any interaction with protesters.

LIGHTFOOT: "I've drawn a very hard line: We will not allow federal troops in our city. We will not tolerate unnamed agents taking people off the street and violating their rights."

District Attorneys Marilyn Mosby in Baltimore and Larry Krasner in Philadelphia penned an op-ed warning President Trump and his administration against sending officers into their respective cities.

The wrote: "We strongly believe that the actions in Oregon are illegal. Should the president proceed with his plan in our cities, his agents will be prosecuted to the fullest extent of the law."

Krinsky says DAs across the country are following the events in Portland and could echo State's Attorney Mosby and District Attorney Krasner's threats of prosecution if federal agents have any contact with protesters.

KRINSKY: "They're very concerned when they see what's happening in Portland. They're very concerned when they listen to some of the words of the president about what he intends to do. … It doesn't mean that they're going to be rash. But I think it also means that they are not going to be silent, and they're not going to simply shrink into the background when these things are happening in communities that they have been elected and sworn to help protect."

According to the Washington Post, the Trump administration has plans to send even more federal officers to Portland as protests continue to grow.