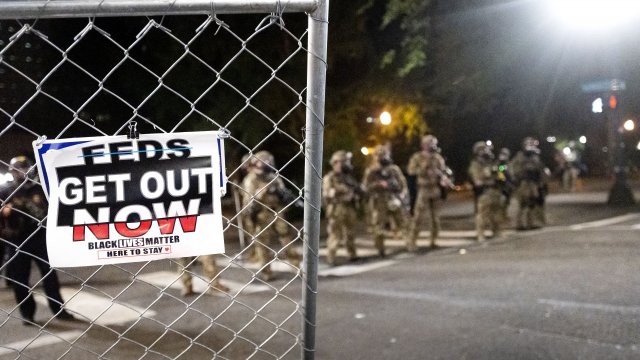 SMS
President Doubles Down On Sending Federal Officers To Major Cities
By Jamal Andress
By Jamal Andress
July 20, 2020
The Trump administration doubled down on deploying federal officers to Portland, Oregon, and plans to take similar action in other major cities.
SHOW TRANSCRIPT

Federal law enforcement officials have once again tear gassed and used other means of force against protesters in Portland, Oregon. Meanwhile, city officials are pushing back.

MAYOR TED WHEELER: "We have dozens, if not hundreds, of federal troops descending upon our city, and what they're doing is they are sharply escalating the situation. … Their presence here is actually leading to more violence and more vandalism."

GOV. KATE BROWN: "Oregonians are appalled, and Americans should be, too."

Portland has seen more than 50 days of protests over racial inequality and use of force.

But President Trump and his administration have doubled down on their decision to deploy federal officers to Portland and they plan to take this same type of action in other cities.

PRESIDENT TRUMP: "New York, Philadelphia, and Chicago and Detroit and Baltimore and Oakland is a mess. We're not going to let this happen in our country. All run by liberal Democrats. … We're gonna have more federal law enforcement, that I can tell you. In Portland they've done a fantastic job."

In an interview, acting deputy Homeland Security Secretary Ken Cuccinelli echoed the president, defending the officers’ presence in the city.

CUCCINELLI: "The threat to those federal facilities and officers did materialize in the July Fourth weekend and has maintained since that time. And as long as it does, we will maintain our presence. When that violence recedes and those threats recede, that is when we will ratchet back down to what I would call normal presence."

Since federal officers hit the ground in Portland, three U.S. House committee chairs and Oregon's U.S. Attorney have both requested investigations into the federal presence in the city.

Also, the Oregon attorney general has filed suit requesting a temporary restraining order to stop federal authorities from making arrests in the state.

ELLEN ROSENBLUM: "These federal agencies are operating with no transparency and against the will of just about every leader in our state."

According to the Chicago Tribune, President Trump will be sending 150 federal officers to Chicago this week. This comes after the Chicago Mayor Lori Lightfoot said she has “great concerns” about the president's involvement.