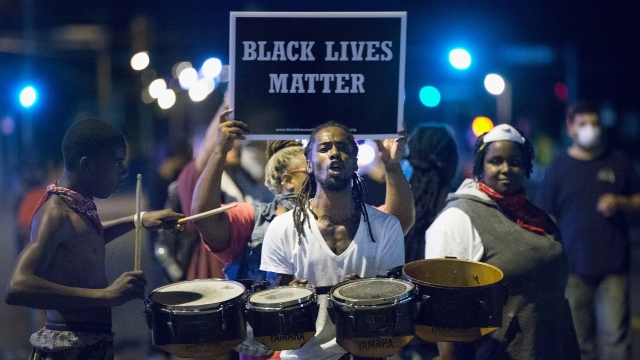 A Louisiana officer filed a lawsuit over an alleged injury sustained during a 2016 protest after the fatal police shooting of Alton Sterling.

Can Black Lives Matter be sued? A federal judge is about to decide.

A U.S. district judge is expected to determine "within the coming days" if a Louisiana police officer's lawsuit against Black Lives Matter and one of its leaders can proceed.

The unnamed officer was injured at a protest outside police headquarters over the death of Alton Sterling in Baton Rouge. Police shot and killed Sterling last summer.

The officer filed suit in November against Black Lives Matter and activist DeRay Mckesson. The suit claims the officer was hit in the face with piece of concrete during the protest and claims that knocked out some of his teeth and caused other injuries.

According to documents obtained by The Guardian, the NYPD regularly sent undercover officers to monitor, follow and film BLM activists.

The officer's attorney insists Black Lives Matter is an organization that can and should be liable for his injuries.

The officer's lawyer also told the judge it is an "unincorporated association" that has meetings, accepts donations and has national chapters.

Although the judge hadn't made a decision as of Friday morning, there is some precedent for this case. A judge dismissed a similar lawsuit earlier this month, citing, in part, a lack of evidence that Black Lives Matter could be sued.