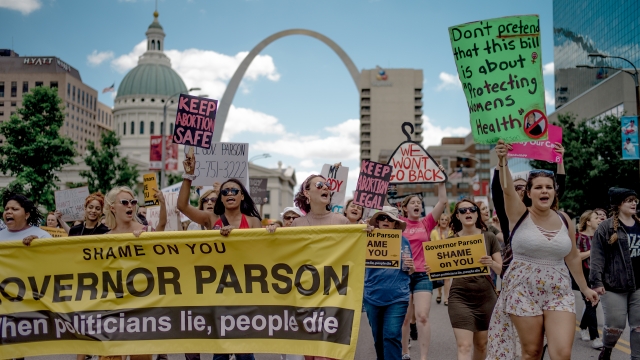 A federal judge has temporarily blocked parts of a sweeping abortion ban from taking effect in Missouri.

A U.S. district judge in Kansas City, Missouri, said in an 11-page opinion Tuesday that the legislation "conflicts with the Supreme Court ruling that neither legislative or judicial limits on abortion can be measured by specified weeks or development of a fetus; instead, 'viability' is the sole test for a State's authority to prohibit abortions where there is no maternal health issue."

The bill — which was set to take effect Wednesday — would ban abortions after eight weeks without exceptions for victims of rape or incest. Providers who preform abortions after that could face prison time and be subject to lose their license.

Planned Parenthood in St. Louis and the American Civil Liberties Union filed the lawsuit in July. The plaintiffs argued the bill violates the 14th Amendment because it "plainly prohibits a patient from making the ultimate decision to terminate her pregnancy before viability."

The judge's temporary block will stay in place while the lawsuit makes its way through the courts.