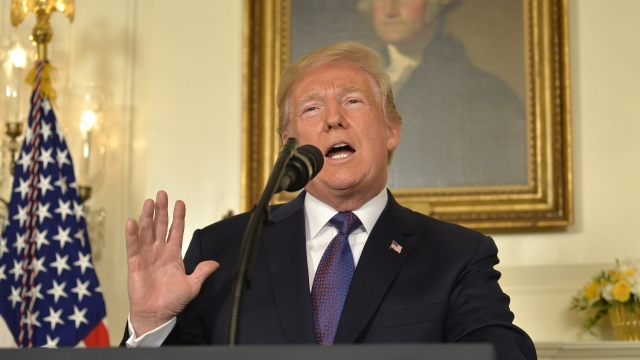 SMS
Federal Judge Blocks Trump Administration Asylum Policy
By Ahmed Jawadi
By Ahmed Jawadi
April 8, 2019
It's part of a lawsuit filed over the U.S. policy of forcing some asylum-seekers to wait out their immigration hearings in Mexico.
SHOW TRANSCRIPT

A federal judge has blocked the Trump administration's policy of sending some asylum-seekers to Mexico to wait out their immigration court hearings.

The judge issued a preliminary injunction Monday as part of a lawsuit filed on behalf of 11 asylum-seekers back in February. That suit alleges the policy endangers asylum-seekers and violates "humanitarian protections to which they are entitled under United States and international law." In his ruling, the judge said the plaintiffs had "presented uncontested evidence that they fled their homes [...] to escape extreme violence, including rape and death threats."

The Trump administration announced late last year that the U.S. would begin forcing some asylum-seekers who enter the U.S. via Mexico to return to Mexico to await decisions in their cases. Although the policy initially only applied to migrants at San Diego's San Ysidro crossing, outgoing Homeland Security Secretary Kirstjen Nielsen ordered that it be expanded along the southern border last week.

The ruling will go into effect Friday, as the judge wanted to give U.S. officials a chance to appeal.