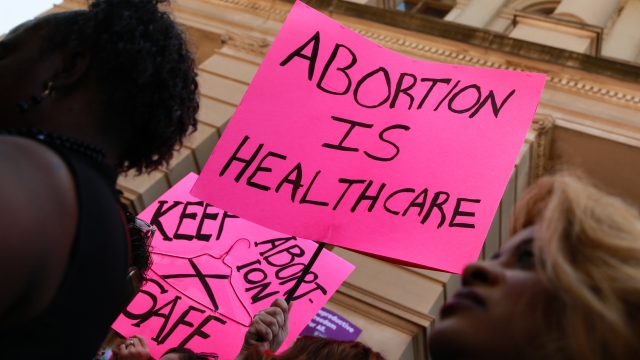 On Tuesday, a federal judge blocked a series of abortion laws in Arkansas, arguing they pose "an imminent threat" to the constitutional rights of women.

The legislation was scheduled to take effect just hours after U.S. District Judge Kristine Baker issued a preliminary injunction to block them — again. She issued a restraining order blocking the same three laws just two weeks ago. That order would have expired Tuesday evening.

The first law requires that physicians performing abortions be board-eligible or board-certified, which would likely lead to the state's only surgical abortion clinic to close. The second law bans abortion after 18 weeks of pregnancy, with exceptions in cases of rape, incest or life-threatening circumstances. And the third law bans abortions that are pursued solely because of a fetal diagnosis of Down syndrome.

Baker said these would impose "substantial burdens on a large fraction of women seeking abortions in Arkansas that 'substantially outweigh' any state interest or any benefits to those women."

The state says these laws were made to protect patient safety, prevent late-term procedures and block discriminatory practices against fetal diagnoses of Down syndrome.

The office of Arkansas Attorney General Leslie Rutledge said it immediately appealed Judge Baker's decision. In a statement, it said Rutledge will continue to defend the laws to protect women's health and unborn life.

Arkansas has been gradually tightening restrictions on abortion clinics for a while now. The Supreme Court recently declined to hear a challenge to a 2015 law that imposed tighter restrictions on doctors who provide abortion-inducing drugs. Abortion rights advocates had challenged that law, saying it placed an undue burden on a woman's right to have the procedure.