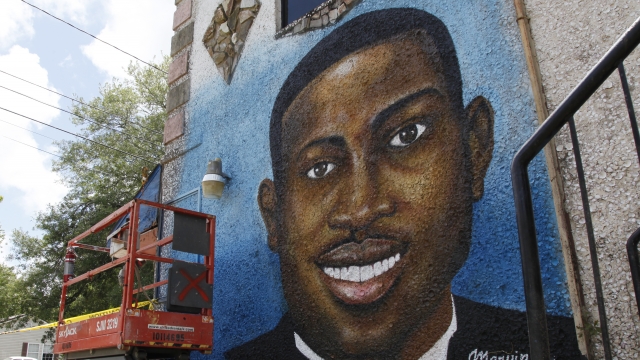 Taking center stage this week, racial insults sent via text and posted to social media by two of the men convicted by the state of killing Ahmaud Arbery.

The family of Ahmaud Arbery arrived at court in Brunswick, Georgia Friday after a long week of disturbing testimony in the federal hate crimes case.

A Georgia Bureau of Investigation agent testified William "Roddie" Bryan Jr. said he had never seen Ahmaud Arbery before but suspected that Arbery had "done something wrong" when he got into his truck and helped neighbors — Greg and Travis McMichael — chase the 25-year-old Black man through their neighborhood.

After the shooting of Arbery took place, the agent said Bryan referred to him as "the Black guy" and a "joker" as Arbery's body lay in the street nearby.

"I knew from the very start that they were racist. I'm not surprised at all," Arbery's mother Wanda Cooper-Jones said.

Bryan and the McMichaels were convicted of murder last fall. The federal charges accuse them of targeting Arbery because of his race. In court, text and Facebook conversations with friends reveal Travis McMichael frequently used the n-word and said more than once he was, "glad he wasn't a Black person," said an FBI agent.

Evidence shows McMichael also used violent language in a comment on a Facebook post reacting to a video of primarily Black teens beating up a white teenager. Travis McMichael wrote: "I say shoot them all" then made a reference to using a semi-automatic gun.

Arbery's father, Marcus Arbery, was so disturbed by the evidence, he walked out of the court room at one point.

"They killed him because he was a young Black man, you know what I'm saying? The world don't need people like them in the world. They hate Black people that bad," he said.

A Georgia Bureau of Investigation agent also revealed Travis had a decal of a Confederate cross on the inside lid of a toolbox.

Marcus Arbery Sr. says the evidence should leave no doubt in anyone's mind why his son was targeted and murdered.