Groups Ramp Up Messaging Efforts On Judicial Picks Ahead Of 2020 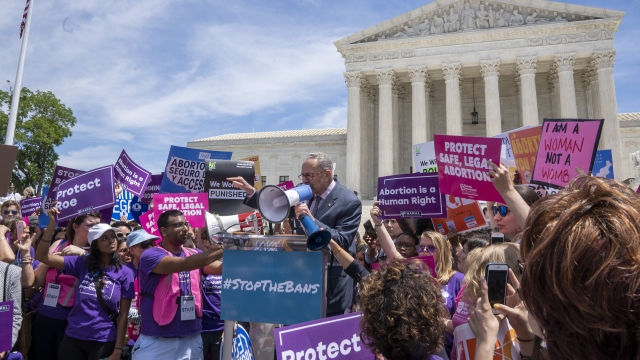 The reignited debate over abortion and  the contentious confirmation process of Supreme Court nominees are just some of the reasons why the fate of the judiciary is expected to be a marquee issue during the 2020 election. And groups on both sides of the aisle see an opportunity to drum up voter support.

"Almost every question and issue in America is decided by a federal judge," said Nan Aron, president of the Alliance for Justice. "We will make sure during the election that Americans know just how important a role a president has in selecting federal judges and in shaping the federal bench."

The progressive leaning Alliance For Justice is planning to launch a new initiative working with other like minded groups to create a list of diverse judicial nominees.

"And that talent pool will include civil rights lawyers, women's rights lawyers, plaintiffs, environmental lawyers, public defenders, [and] individuals who will bring a wealth of experience and talent," Aron added.

The group hopes to be a check to conservative groups like the Federalist Society and Heritage Foundation which provide a list of candidates for federal judicial positions.

President Donald Trump has appointed over 100 federal judges since the start of his term, including two Supreme Court justices.

And Senate Majority Leader Mitch McConnell has moved quickly to confirm more judges ahead of next year's presidential election. The Kentucky Republican has changed the rules in the Senate to speed up the approval process. A move he says was necessary because of Democratic stalling tactics.

"And confirming unobjectionable individuals continues to take more of the Senate's time than it should but this obstruction is not going to deter us," said Senate Majority Leader Mitch McConnell.

Organizations like the Judicial Crisis Network say appointing federal judges has been one of Trump's biggest accomplishments in office.

"Democrats are taking their obstruction to disgraceful new lows," said an announcer in a Judicial Crisis Network ad.

The group is planning on pushing back with a messaging campaign educating voters about Trump's promises and the impact of federal judges. A government position that could have far reaching effects on society and some of the fiercely debated political issues.

Gayle Trotter, a spokeswoman for the group, anticipates court picks will be a major issue during the 2020 race.

"I see it more as education rather than a fight," said Trotter. "My organization, the Judicial Crisis Network is working on informing people about the quality of these candidates and the fact that President Trump is delivering on his promise to appoint well qualified independent thinkers to the courts."

Some Democratic presidential hopefuls are vowing to confirm judges that will uphold liberal policies like the right to an abortion, which has been a contentious issue after some states moved to restrict the practice.

"I will not appoint a justice or a judge who does not believe that Roe v. Wade is settled precedent," said Democratic senator and presidential candidate Kirsten Gillibrand.

According to a recent Newsy poll about 88 percent of Democrats don't want Roe v. Wade to be overturned. Compare that to Independents who are nearly evenly split at 49 percent against and 51 in support. While Republicans are 35 percent against overturning the precedent and 65 percent in support.  Just one divisive issue in the court of public opinion that will likely be debated and challenged in the federal courts.