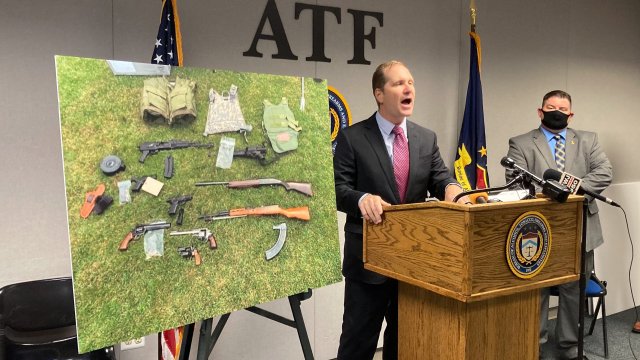 SMS
Federal Agents To Deploy To Cleveland, Detroit And Milwaukee
By Jamal Andress
By Jamal Andress
July 30, 2020
Local officials emphasized the Trump administration's response to civil unrest in Oregon is not what these officers will be doing in their cities.
SHOW TRANSCRIPT

DETROIT PROTESTER: "It doesn't actually fix the problems that are plaguing our communities."

WILLIAMS: "We will never bring folks here to harm our residents, period."

CRAIG: "There are no members from Homeland Security coming in to work with us on our nightly protests. Absolutely not."

Along with Kansas City, Chicago and Albuquerque, Operation Legend will be sending federal officers and dollars to Cleveland, Detroit and Milwaukee — three cities that have seen historic upticks in gun violence.

According to the Department of Justice, shootings in Cleveland are up 35% compared to 2019. In Detroit, shootings are up 53%. And in Milwaukee, homicides are up 85% this year compared  to 2019.

DIER: "Gun violence is taking over the streets of Detroit. Statistics do not lie."

As a part of Operation Legend, there's going to be at least 25 additional federal agents sent to Cleveland and Milwaukee and another 42 federal officers deployed in Detroit. That's on top of more than 20 million federal dollars being sent to these three cities to hire additional local police.

But in all three announcements, local officials emphasized that the Trump administration's response to civil unrest in Portland is not what these officers will be doing in their respective cities.

KRUEGER: "Operation Legend's mission will not change. It is what I described."

SCHNEIDER: "Well, fortunately, this is not Portland, and this not Seattle."

These officers will reportedly focus on ongoing missions regarding illegal guns, gang activity and drug trafficking.

In Portland, federal officials have struck a deal with local leaders to leave the front lines of city protests if they believe federal property is "safe and secure." But there's some confusion about how quickly federal forces will be phased out.