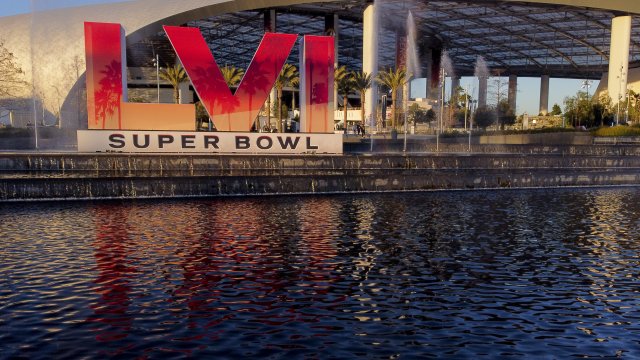 SMS
Federal Agents Crack Down On Fake Super Bowl Gear
By James Packard
By James Packard
February 8, 2022
Customs and Border Protection says the impact is significant on the U.S. economy as well as U.S. consumers.

What looks like an oddly secure shipping warehouse near Los Angeles International Airport is actually a Super Bowl nerve center in the fight to protect a vital bastion of America's economy.

Here, the blue-clad warriors of Customs and Border Protection are looking for fakes.

"Looking at the box ... Does it really look like it's coming from an actual authorized retailer? And the material, we look at the material," Jose Ramos with Customs and Border Protection said.

"Because the two teams have been determined, you'll see an influx of items for the two teams that are playing in the Super Bowl," Jackson said.

From Super Bowl rings to hats — even the Vince Lombardi Trophy — all faked to money grab.

"We have co-mingled items. Shirts and hats from various sports ... Then we already know that's a big red flag to investigate it further," said David Tapia with Customs and Border Protection. "It could be from a new entrepreneur that's trying to make a quick buck to the criminal organizations that we have out there."

The screening of counterfeit products comes through one of the largest shipping channels in the nation and is year-round. But until very recently, it wasn't quite working.

"Our team of CBP officers was going to over 150 locations around the airport to conduct cargo exams," Davies said.

The facility is a new way to condense the search with the biggest game of the year less than a week away: crunch time for thieves.

In other words, the facility — and its new toys — couldn't have come at a better time. Davies says the new X-ray machine can scan up to 15,000 parcels a day.

Once boxes go through this machine, they're searched if they raise a red flag and pulled if they're deemed counterfeits. Then they are passed off to the arm of Homeland Security charged with figuring out how they got in in the first place.

"It's really going to impact the vendors that are in and around SoFi stadium because those folks have paid taxes, they've paid licensing fees, and they're competing with criminals that haven't done that," said Super Bowl LVI Deputy Lead Field Coordinator Carlos Martel. "Ultimately our goal is to dismantle the entire transnational organization from the manufacturer to the shipper, importer and the sellers," Jackson said.

All part of a big net to catch a fake.

"It's not just one hat. It ends up being thousands, millions of hats, and the impact is significant," said Super Bowl LVI CBP Federal Coordinator Aaron Heitke.

"If the price is too good to be true, it probably is," Jackson said.