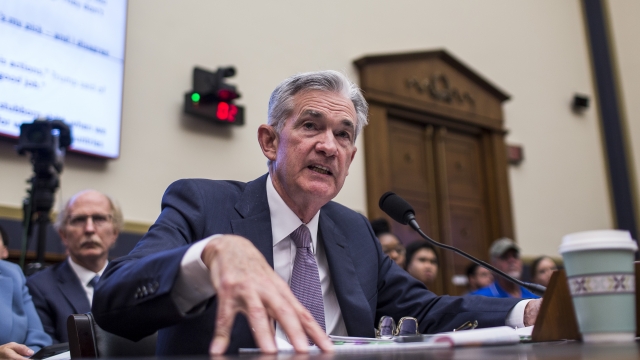 SMS
Fed Cuts Interest Rates For The First Time In Over A Decade
By LeeAnne Lowry
By LeeAnne Lowry
July 31, 2019
Just seven months after the last increase, rates were cut by a quarter of a percentage point.
SHOW TRANSCRIPT

The Federal Reserve cut interest rates on Wednesday. It's the first cut since the financial crisis in 2008, when officials slashed the rates to nearly-zero and held them there for seven years.

Interest rates affect how much money is borrowed. When interest rates are lower, people tend to borrow more, which can stimulate job growth and investment.

Just seven months after the last increase, rates were cut by a quarter of a percentage point. So now the rate sits at about 2.25%. That's still within what's considered the "sweet spot" to maintain a healthy economy.

President Donald Trump has been a major critic of the central bank's previous interest hikes. That's led to suspicion that the cut may have been motivated by the president rather than to preserve economic growth, especially since the economy is strong right now. The GDP saw a 2.1% gain in the second quarter and employment is the highest it's been in nearly 50 years. It isn't typical to cut rates in an economic environment that looks so positive. But Powell has repeatedly assured reporters the Fed is independent from the White House.

The Fed has cut interest rates only four other years in the past quarter century. In 2007, it actually cut interest rates by a quarter of a percentage point twice. That year, the economy was strong, but the recession was looming. The housing market suddenly slowed and the Committee said there were risks of inflation. And in 2008, the Fed cut interest rates multiple times, including two instances of cuts of three-quarters of a percentage point. An economist told The New York Times that cuts that large are appropriate "when time is of the essence, namely, in financial crises or if you're behind the ball on economic data."