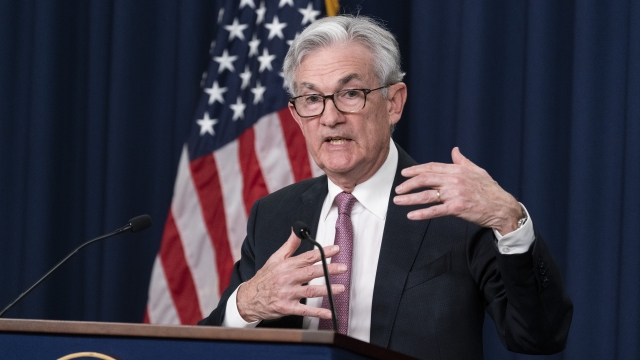 The Federal Reserve has announced its largest interest rate hike since 1994 — a bigger increase than it had previously signaled and a sign that the central bank is struggling to restrain stubbornly high inflation.

The central bank raised its benchmark short-term rate by three-quarters of a percentage point, far larger than the typical quarter-point increase, to a range of 1.5% to 1.75%. This also likely forecasts additional large rate hikes through the end of the year.

A series of sizable increases would heighten borrowing costs for consumers and businesses, likely leading to an economic slowdown and raising the risk of a recession. The Fed's previous rate hikes have already had the effect of raising mortgage rates roughly 2 percentage points since the year began and have slowed home sales.

Other central banks around the world are also acting swiftly to try to quell surging inflation, even with their nations at greater risk of recession than the U.S. The European Central Bank is expected to raise rates by a quarter-point in July, its first increase in 11 years. It could announce a larger hike in September if record-high levels of inflation persist. On Wednesday, the ECB vowed to create a market backstop that could buffer member countries against financial turmoil of the kind that erupted during a debt crisis more than a decade ago.

The global efforts to tighten credit are escalating the risk of a severe downturn in the United States, Europe and elsewhere. Last week, the World Bank warned of the threat of “stagflation” — slow growth accompanied by high inflation — around the world.

By the end of 2022, the Fed will have raised its key rate as high as a range of 3.25% to 3.5%, some economists estimate, higher than what was forecast just a few weeks ago. At that level, the rate would likely be well above “neutral,” meaning at a level that would be intended to slow growth. In March, the Fed had forecast that it would raise rates only to a range of 1.75% to 2% by year's end.

Expectations for larger Fed hikes have sent a range of interest rates to their highest points in years. The yield on the 2-year Treasury note, a benchmark for corporate bonds, has jumped to 3.3%, its highest level since 2007. The 10-year Treasury yield, which affects mortgage rates, has reached 3.4%, up nearly a half-point since last week and the highest level since 2011.

After the Fed's last meeting in May, when it raised its benchmark rate by a half-point, Chair Jerome Powell said that similar increases were “on the table” for the central bank's June and July meetings, should the economy “evolve in line with expectations.”