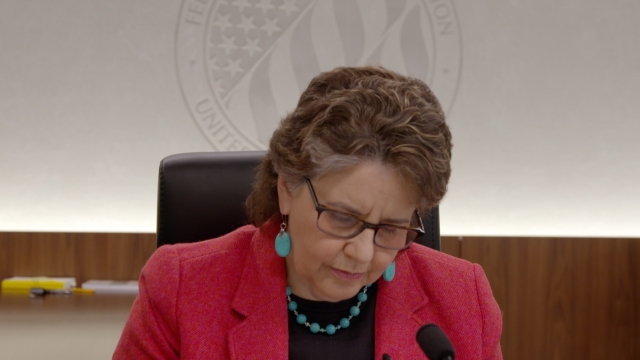 "We have to be a lot more worried about what foreign governments might be trying to intervene in our election. This would be illegal, but will we catch it? Will it be punished? These are all important issues. That's what keeps me up at night."

Ellen Weintraub is a commissioner on the U.S. Federal Election Commission, the independent agency tasked with monitoring how money is raised and spent in elections -- and enforcing penalties to violators. She’s worked there for 17 years, and these days she’s sounding alarm bells -- warning that the FEC can’t do its job and that the U.S. isn’t doing enough to ensure the 2020 election is just for Americans, funded by Americans.

Foreign funding, disinformation, micro-targeting. These are all issues that we have to think about for the 2020 election. What are your biggest concerns?

The FEC currently has three commissioners -- one Republican, one Independent, and Weintraub, a Democrat. Another commissioner resigned in August, leaving the agency one person short of a quorum needed to enforce regulations. And President Donald Trump’s sole nominee for commissioner has been awaiting Senate confirmation for more than two years.

The fact that there are only three commissioners right now, meaning that there is no quorum, how does that affect election security?

"We are really handicapped right now," Weintraub says. "We can't issue new regulations to adapt to changing circumstances. We can't issue advisory opinions in case somebody has a particular question. We can't launch any new investigations for the complaints that are piling up every day and we can't conclude any investigations."

Weintraub told Newsy that roughly 300 cases have not been closed, including a complaint that a Sen. Bernie Sanders-founded nonprofit received funds exceeding federal limits. She says 119 cases are ready for commission decisions, including penalizing people.

All those cases just sit there and the numbers keep piling up.

Senate Rules Committee Chairman Roy Blunt didn’t respond to Newsy’s requests for comment on why the committee has delayed a confirmation hearing on the president’s nominee for commissioner since 2017. And time is ticking when it comes to enforcement.

There is a statute of limitation of five years, and 2016 was four years ago. Are there any issues that you would like to see addressed specifically from the 2016 presidential election?

"We do have matters in-house that we're butting up against the statute of limitations on. I'm concerned we're just gonna lose them," Weintraub tells Newsy.

Even before losing its enforcement abilities, the polarization racking Washington was felt inside the halls of FEC. Weintraub has often been at odds with Caroline Hunter, the Republican and current chair of the agency. Last summer, Weintraub wanted to contact the FBI to ask whether it was investigating allegations that a Russia banker funneled money to the National Rifle Association to help President Trump. She says Republican colleagues would not agree to her making the phone call.

"Those cases were closed without investigation much to my regret, and I think the American people are never going to know the answer to that question."

The FBI would not confirm to Newsy whether the cases were closed.

"I'm continually frustrated, but I think that this agency is so important. I think this is such an important mission and I am so committed to it that I just have to come in every day and keep trying."