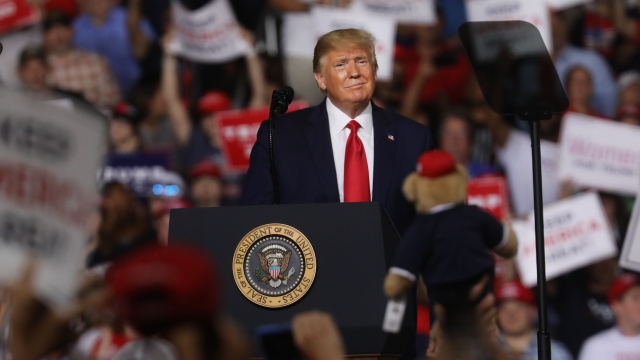 President Donald Trump has repeatedly cited voter fraud as the reason he lost the national popular vote in the 2016 election. On Monday, he attributed that loss to Google.

In a tweet, President Trump accused Google's algorithm of bias, saying its search engine results helped to manipulate millions of votes in favor of his opponent, former Secretary of State Hillary Clinton.

The president's comments follow his remarks at a rally last week in New Hampshire — a state he told attendees he "should have won."

Federal Election Commission Chairwoman Ellen Weintraub, though, pushed back on President Trump's allegations. In a letter sent Saturday to the president, Weintraub asked him to either provide evidence of voter fraud in New Hampshire or stop mentioning it.

Weintraub defended her comments Monday in an interview with CNN. She said "there is no evidence of rampant voter fraud in 2016" or any other election, adding that numerous studies have found no proof of its occurrence. The White House has not yet responded to Weintraub's comments.

Trump's accusation is based on a study by research psychologist Robert Epstein, who testified before the Senate Judiciary Committee this past July.

Epstein told the committee his research found what he alleges to be a "statistically significant" pro-Clinton bias in Google's search results. He said those results could have shifted votes, but stopped short of claiming that happened in the 2016 election. And on Monday, he told CNN he rejected Trump's claim that Google manipulated votes.

"We have never re-ranked or altered search results to manipulate political sentiment. Our goal is to always provide people with access to high quality, relevant information for their queries, without regard to political viewpoint."