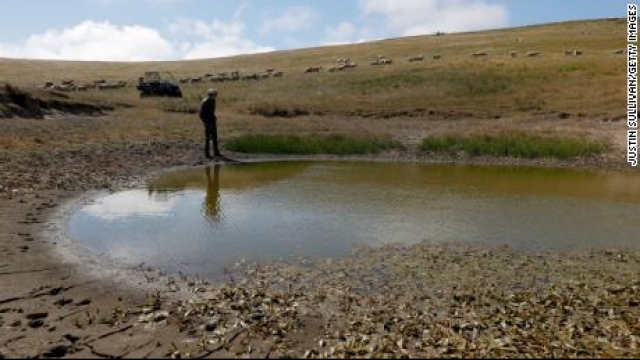 The U.S. Drought Monitor says nearly 10% of the contiguous U.S. is under an "exceptional drought." That’s the highest that rate has been since 2011. Officials say these conditions could lead to threats like large wildfires and small crops. Lake Mead at the Hoover Dam is at its lowest water level in decades.

That’s one part of the West Coast attempting to cope with another dry week with above-average temperatures.

Gary Kremen, vice chair of the Valley Water Board of Directors, says, "We are truly in a dire situation."

According to the U.S. Drought Monitor, California, Oregon, Utah and Nevada are entirely under drought conditions.

"Because the entire state, or almost all of the state is in an exceptional drought, everyone is trying to buy surplus or emergency water, what’s left on the market, but it’s bidding the price up-and-up," Kremen said.

But it’s not just the West Coast dealing with a lack of rain.

Some farmers in Wisconsin are forced to use sprinklers for their fields.

Shawn Fideler of the Fideler Farm said, "We do water it, but it evaporates and dries up right away. That's one of the challenges we've been having."

Officials are asking people in drought affected states to conserve when possible.

"If you’re going to water anything outside, just water trees that might die, take shorter showers, fix leaks etc.  We’ve called for 15% mandatory reduction in use and it could get higher," Kremen said.

The National Oceanic and Atmospheric Administration forecasts the 2021 southwest monsoon season will likely be drier than usual.