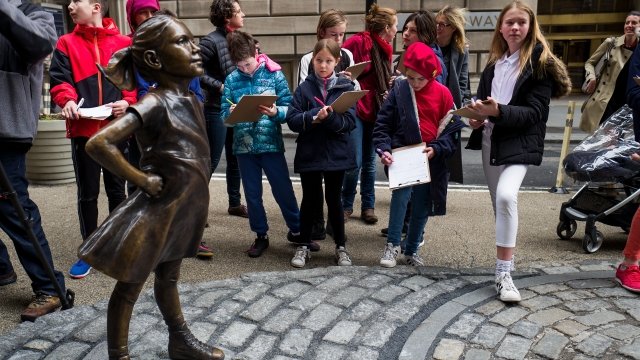 "Fearless Girl" is moving. Instead of facing off against the famous "Charging Bull" statue, she'll stare down the New York Stock Exchange a few blocks away. That's according to New York City Mayor Bill de Blasio's office.

The statement said part of the reason for moving "Fearless Girl" is for safety concerns. The statue is located on a narrow median.

De Blasio said: "We are proud to be home to the Fearless Girl. She is a powerful symbol of the need for change at the highest levels of corporate America — and she will become a durable part of our city’s civic life."

State Street Global Advisors put "Fearless Girl" opposite of Wall Street's iconic bull more than a year ago for International Women's Day. It was part of a campaign to encourage companies to employ more women in senior leadership roles.

The statue was supposed to move after April 2017, but the city extended the permit until February 2018.

"Fearless Girl" is set to head to a new long-term home by the end of this year.