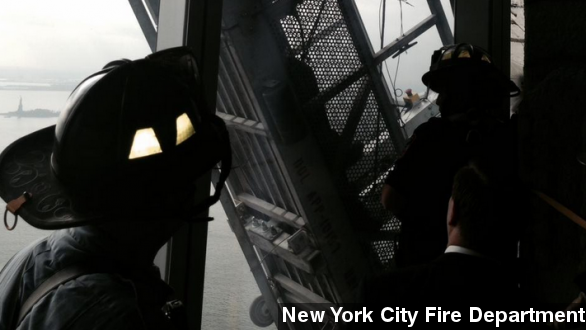 After spending more than an hour dangling from the tallest building in the Western hemisphere, two window washers who were at 1 World Trade Center will have one heck of a story to tell the kids.

The incident began around midday Friday. Reports say the workers were headed up the building when one of the cables became loose, leaving the workers dangling at the 69th floor of the 1,776-foot building.

Both workers were wearing harnesses required by the Occupational Safety & Health Administration when the cable failed.

The New York City Fire Department was able to cut through one of the windows below them and pulled the workers safely inside.

The fire department tweeted this picture showing what the rescue looked like from inside the building.

A CNN analyst explained the lack of strong winds might have been working in the window washers' favor as well.

Throughout the incident, onlookers posted photos and updates on social media.

WCBS reports the area surrounding the building was cordoned off and the National September 11 Memorial & Museum was closed.

More than 1,700 employees began working in the building last week, and around 3,000 more are expected to begin by next year.