FDA Wants To Ban Sales Of E-Cigarettes To Minors 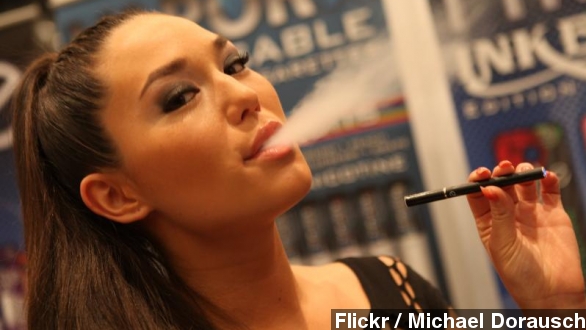 SMS
FDA Wants To Ban Sales Of E-Cigarettes To Minors

By Christine Slusser
April 24, 2014
The Food and Drug Administration wants to crack down on the use of e-cigarettes, banning the sale of the product to minors.
SHOW TRANSCRIPT

The feds are cracking down on e-cigarettes. The industry has been unregulated for years, but the Food and Drug Administration wants to put its legal foot down.

"E-cigarettes use a battery to convert liquid nicotine into a vapor you can inhale, but they have not been under FDA regulation, and their use is rising fast." (Via WTSP)

The FDA wants to ban the sale of the electronic cigs to anyone under 18 just like normal tobacco products.

REPORTER: "It also wants warning labels and it wants manufacturers to tell the government what's in the product."

DR. MARGARET HAMBURG: "Right now, it's like the wild wild west." (Via WJRT)

The New York Times says it's the first time the FDA has proposed new rules extending its authority to e-cigarettes. It notes one of the bigger proposed changes would require electronic cigarette producers to show the FDA its ingredients and detail its manufacturing process.

"Once finalized, the regulations will establish oversight of what has been a market free-for-all of products, including vials of liquid nicotine of varying quality and unknown provenance."

E-cig manufacturers have advertised their products are better for you than, say, the ones the Marlboro Man puffed on. (Via Marlboro)

"Advocates say e-cigarettes can be a healthier alternative to traditional smoking, but the FDA says it's too soon to tell." (Via WDJT)

And it's not just e-cigarettes. The new regulations would also cover pipe tobacco and cigars, which have long slid under the radar compared to their filtered cousins. The U.S. Surgeon General estimates the nation currently has around 42 million smokers.